HSE chief executive Paul Reid has confirmed that Covid-19 close contact testing will resume from January 29th. The service was suspended in December as the sheer number of cases overwhelmed the system. Video: RTÉ 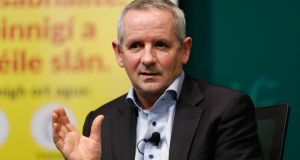 Paul Reid said at a briefing on Thursday that the public should take ‘some solace’ from ‘an improving set of trends’. Photograph: Leon Farrell/Photocall Ireland

The Health Service Executive will recommence close contact testing from Friday and those involved will receive a call if they are regarded as close contacts of someone diagnosed with Covid-19, HSE chief executive Paul Reid has said.

Close contact testing was suspended in December because the sheer number of cases had begun to make it impossible to trace everybody involved.

At present, close contacts of a confirmed case are receiving a text to inform them of their close contact status.

From Friday, the contact management programme will re-instate its multiple call system calling all cases to gather information and from there will call close contacts.

A new portal for booking a test has been developed and will be available to close contacts from Friday.

Mr Reid said it was always the intention to recommence close contact testing once the daily Covid-19 figures dipped under 2,000 a day, which they have been for a number of days.

He also said that the number of close contacts per person has decreased considerably from an average of six at the peak of the current wave to 2.8 now.

“When you put that multiplier effect together, we feel we can go back to it now,” he said.

People were getting texts notifying them of being close contacts and advising them to self-isolate, but they were not being automatically tested.

Those who were symptomatic were invited for testing and testing continued for close contacts in certain environments.

He said the levels of Covid-19 in the community were such that close contact testing was a feasible option.

The weekly HSE briefing at Dr Steevens’s Hospital in Dublin heard that, to date, 161,500 vaccinations have been carried out in the State.

Of those, 71,600 vaccines were administered to people in long-term residential care facilities and a further 89,900 were given to healthcare workers, some of whom (76,100) have received a first vaccine while others (13,800)have had their second dose.

Some 148,500 vaccinations were carried out to Sunday and a further 13,000 took place between January 25th and 27th. Of those, 6,551 people were in long-term residential care facilities such as nursing homes.

The plan is to give 45,000 second dose vaccinations to frontline healthcare workers by Sunday.

The HSE intends to administer 46,000 second-dose vaccinations to healthcare workers and nursing home residents next week.

The rollout of the AstraZeneca vaccine for those aged 70 will commence in the middle of February as planned with over-85s receiving the vaccine first.

However, Mr Reid said there was no certainty on what would happen in March.

He said the HSE was waiting to hear from the European Medicines Agency (EMA) to find out how many vaccines it will receive.

Mr Reid said the public should take “some solace” from “an improving set of trends”.

Hospital numbers are down, he stated. There were 1,620 people in hospital with Covid-19 as of Thursday morning, after numbers peaked at 2,020 on January 18th.

There were 216 people in intensive care units (ICU) with Covid-19 as of Thursday morning. Mr Reid warned that there are 18 ICU beds remaining in the system and the situation is “extremely tight”.

There were 348 patients receiving advanced respiratory support in hospital, down from 440 last week.

The number of healthcare workers unable to go to work having contracted Covid-19, or because they are close contacts, declined from 6,600 last week to 5,500 this week.

The average number of hospital admissions has gone from 150 per day last week to 90 per day in the last week.

However, 830 people have died this month to date in comparison with 164 in November and 176 in December.

Of those who died this month, 87 deaths are linked to hospital outbreaks and 282 to nursing homes.

The HSE will take its guidance on whether or not to vaccinate people over the age of 65 with the AstraZeneca vaccine from the EMA.

The EMA is set to give its guidance on Friday following an announcement by the German authorities that it would not be giving the vaccine to those aged over 65.

The German vaccine committee cited “insufficient testing data” as the reason why the vaccine will not be given to over-65s as just 8 per cent of those involved in the vaccine trial were over that age.

Dr Henry said the EMA is the advisory body for the EU and the HSE will be taking its advice from that.

He said there had already been diversions in relation to the use of the Pfizer-BioNTech uses across different member states.