Covid vaccine gets green light from US FDA advisory panel 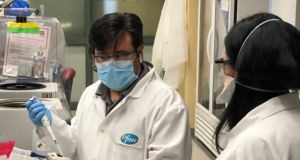 Pfizer’s Covid-19 vaccine has received the backing of an expert panel of advisers to the US Food and Drug Administration for emergency use authorisation.

Pfizer’s Covid-19 vaccine has received the backing of an expert panel of advisers to the US Food and Drug Administration for emergency use authorisation.

The question before the advisory committee was: Based on the totality of scientific evidence available, do the benefits of Pfizer BioNTech Covid-19 vaccine outweigh its risk for use in individuals 16 years and older? The advisory panel voted 17 to 4, with one abstention.

The vote came after a discussion over close to nine hours where strong concerns were raised about plans to cut short the blinded trial on the back of just two months of safety data.

Pfizer argued that the trial should be “unblinded” so that participants currently receiving the placebo can have access to the vaccine.

Members of the FDA’s vaccines and related biological products advisory committee – a panel of outside advisers – and other public heath officials debated the impact of such a move on securing more detailed longer-term safety data on the vaccine which uses technology not previously used in human medicines.

The FDA is expected to make its authorization decision within days of the meeting. It is likely to follow the recommendation though it is not obligated to do so.

Documents prepared by the FDA ahead of the meeting did not point out any new safety or efficacy issues, raising hopes the vaccine will soon be authorised in the United States. It has already received regulatory green lights from the UK and Canada.

Pfizer has asked for authorisation for use of its two-dose vaccine in people aged 16 to 85. Pfizer executive Bill Gruber said on Thursday that it planned to file for full US. approval of its experimental coronavirus vaccine by April next year.

Pfizer and its German partner, BioNTech, last month said a two-dose regimen of the vaccine was 95 per cent effective in preventing illness from COVID-19, and detailed data released in the agency’s documents showed the vaccine began showing some protection even before volunteers received a second dose.

It emerged in the committee that, although anyone testing positive for Covid had been excluded from the trial, between 2 and 3 per cent of participants had antibodies indicating that they had previously contracted the virus.

Asked how sure they were that one dose of the vaccine would not be enough, Pfizer head of vaccines R&D, Kathrin Jansen, said that the company “cannot conclude we would see a similar persistence of protection” on the basis of the trials undertaken so far.

However, she warned about the urgency of vaccine approval, noting projections that the US could see deaths rising to 55, 000 a month.

Several issues remain unclear. First is whether the vaccine will prevent people becoming infected with the virus and infecting others even if they do not fall ill themselves.

Second, there is no certainty on how long the vaccine will grant protection from the virus and also to what degree its real world performance will differ from that delivered in carefully controlled trials.

Concerns were also expressed that data to date did not give strong enough understanding of the vaccines efficacy in certain key groups of the population .

Health economist Diana Zuckerman from the National Center for Health Research said the data available to date – covering patients two months after the second dose – was too short to assess long-term safety and efficacy for the vaccine. she said it was essential that the randomised control trial must continue.

She also said there had been too few severe cases in the trial to draw conclusions.

The data presented to the advisory committee confirm no serious adverse reactions to the vaccine, with the most likely reactions being pain at the injection site and mild fever in the day after the injection is taken.

Reactions were higher on the second dose than the first and less prevalent among older participants in the trial.

FDA commissioner Steven Hahn, speaking ahead of Thursday’s meeting, said the agency was carefully reviewing all the data on Pfizer’s vaccine, including potential allergic reactions following a warning from UK regulators.

“We’re working very closely with our UK partners to understand what went on with respect to those allergic reactions,” Mr Hahn said.

“FDA is the gold standard for regulatory approval or authorisation of medical products,” he added. “If our career scientists say that the vaccine is safe and effective, I have complete confidence in that decision, and I think the American people should as well.”

The committee also heard submissions about when people who were on the placebo during the clinical trail should get access to the vaccine, assuming if it is approved.

Much of the discussion so far has focused less on whether the vaccine should be authorized, and more on how its emergency use would affect the scientific integrity of the ongoing trial and the way other vaccines are studied in the future.

Once the vaccine is cleared, Pfizer has said it has an ethical responsibility to tell participants if the vaccine is available to them outside of the trial. It has asked the FDA to allow it to give the vaccine to volunteers who had been in the placebo group that request it.

The concern, expressed by both the FDA and members of the advisory panel, is that “unblinding” the trial will make it harder to continue collecting data on long-term safety and effectiveness, and would make it more challenging for companies still testing vaccines to conduct blinded trials, in which people do not know if they got the experimental vaccine or a placebo.

“Once you unblind, you can never go back. We can never collect those data that we need and people want unless you completely redo the whole study,” said Dr. Gregory Poland, a virologist from the Mayo Clinic in Rochester, Minnesota, who has previously served two terms on the FDA advisory panel.

The committee is due to meet next Friday to consider approving Moderna’s vaccine. – additional reporting Reuters