Drug has already been given to 150,000 Russians despite trials continuing 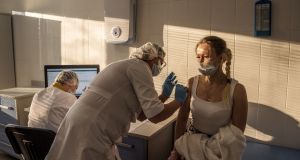 Lyudmila Soboleva, a doctor, is inoculated with Russia’s Sputnik V vaccine for Covid-19, in Moscow.

The developers of Sputnik V say it has already been given to 150,000 Russians despite still undergoing phase three trials, which have shown that it is more than 90 per cent effective. AstraZeneca’s vaccine has an average efficacy of 70 per cent, according to interim data from late-stage clinical trials.

“Today we announce a clinical trial programme to assess safety and immunogenicity of a combination of AZD1222, developed by AstraZeneca and Oxford University and Sputnik V, developed by Russian Gamaleya Research institute,” AstraZeneca said on its Russian website on Friday.

Both vaccines are based on the adenovirus that causes the common cold, but while AstraZeneca’s shot contains genetic material from the virus that infects chimpanzees, Sputnik V uses two strains of human adenovirus to trigger an immune response.

“The decision by AstraZeneca to carry out clinical trials using one of two vectors of Sputnik V to increase its own vaccine’s efficacy is an important step towards uniting efforts in the fight against the pandemic,” said Kirill Dmitriev, chief executive of the Russian Direct Investment Fund that is developing Sputnik V with the Gamaleya Institute.

“This unique example of co-operation between scientists from different countries in jointly fighting coronavirus will play a decisive role in achieving a final victory over the pandemic globally,” he added.

The collaboration with AstraZeneca may help boost confidence in Sputnik V, amid scepticism over the speed of its rollout and the scope and transparency of data from clinical trials. Russia’s defence ministry claims the vaccine is a victim of a foreign financed “information sabotage” campaign.

The Kremlin hailed Sputnik V as the world’s first registered coronavirus vaccine in August, when Russian regulators approved it before phase three trials had even begun.

“We believe the poor methodological quality, design flaws in the study, errors in data analysis, and poor description of the study cast doubt on the main conclusions about the safety and efficacy of the vaccine,” three vice-presidents of Russia’s Society for Evidence-Based Medicine said of the available Sputnik V test data.

“This is a completely unacceptable – even laughable – political bid to turn vaccine development into a competition, breaking the most important norms of testing,” they wrote in an open letter.

The Kremlin has ordered the start of mass vaccination, with medics and teachers first in line. There have been reports of doctors and nurses being pressured to have the jab by health chiefs, however, and a survey showed last month that 59 per cent of Russians did not want to be inoculated.

Alexander Ginsburg, the head of the Gamelaya Institute, was quick to clarify that three days of moderation around each jab would be enough: “One glass of champagne never hurt anyone,” he said.

Meanwhile, an experimental Covid-19 vaccine developed by Sanofi and Britain’s GlaxoSmithKline showed an insufficient immune response in clinical trial results, the French drugmaker said on Friday, a blow to efforts to fight the pandemic.

The two companies said they planned to launch another study next year, hoping to come up with a more effective vaccine by the end of 2021. The news comes as a disappointment for a crop of vaccines under development that rely on more conventional proven designs as the shot developed by Pfizer and BioNTech using breakthrough technology gets rolled out across Britain.

The US Food and Drug Administration is “very close” to granting emergency use authorisation for the Pfizer vaccine, US health secretary Alex Azar said on Friday. The vaccination of the first Americans outside clinical trials could begin on Monday. – additional reporting: Guardian