EU paying less than US for supplies of Covid vaccine 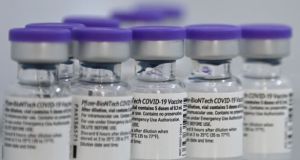 The new deal that doubles Ireland’s access to the Covid-19 vaccine developed by German company BioNTech makes the European Union the largest customer for the vaccine.

The 600 million doses now secured by the EU, including options, means it accounts for roughly half of all confirmed supplies of the vaccine – the first to be approved for use in Ireland.

While companies, and the EU, have been coy about the price of the vaccine, Belgium’s budget state secretary, Eva De Bleeker, briefly posted the price list on Twitter last month. According to Reuters, it said the EU was paying €12 a dose for the vaccine.

That is well below the $19.50 at which Pfizer has struck two deals with US authorities.

It is reported that the more recent negotiations to double EU supplies was struck at a higher price – €15.50 a dose. That brings it much close to, but still below, the US price.

Pfizer has said that it will not charge other developed countries less for the vaccine than the US will pay, according to Reuters.

Israel, which is currently far ahead of other countries in its vaccine rollout, is also using the Pfizer vaccine. But it appears to have paid a much higher price for it.

Earlier this week, Reuters reported that one official had disclosed, on condition of anonymity, that Benjamin Netanyahu’s government was “paying around $30 per vaccine dose”.

Back in December, Minister for Health Stephen Donnelly told the Oireachtas Health Committee that securing vaccines would cost the State €117.6 million. He said the Government, through the EU, had agreements in place to purchase 15.6 million doses of vaccines from number of different pharmaceutical companies, he said.

On the basis of the agreements already made for the Pfizer vaccine, which are likely to cost the State more than €44 million, the figures quoted by the Minister indicate that it is going to rely heavily on the promised AstraZeneca/Oxford vaccine to manage the pandemic, although it will also get access to supplies of the recently approved Moderna two-shot jab as well as vaccines from Johnson & Johnson’s Janssen unit, GSK/Sanofi and CureVac – assuming they secure regulatory approval – on the basis of figures collated by Duke University in the US.

The Belgian leak says that the EU will pay €1.78 for each of two AstraZeneca doses, $18 for the Moderna jab and between €6.95 and €8.20 for each of the other three. – additional reporting Reuters