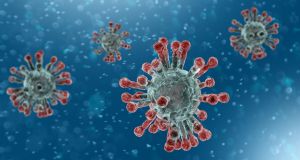 A team at Oxford University in Britain has dosed the first volunteers in a trial of its Covid-19 vaccine “ChAdOx1 nCoV-19” . Photograph: iStock

The testing is being carried out on behalf of Nearmedic International, a specialist pharmaceutical, biotechnological and medical company headquartered in Moscow.

The drug being tested is potentially anti-viral and anti-inflammatory, and could reduce both virus infectivity and disease severity. It will be tested against a panel of viruses, including the influenza virus, circulating betacoronavirus and Covid-19.

“Hvivo is a world leading provider of services to global vaccine and antiviral development companies, and our scientists have considerable knowledge from previous anti-viral trials which gives us confidence in our testing,” said Cathal Friel, executive chairman of Open Orphan.

Open Orphan agreed to merge with UK-based Hvivo last year in a £30 million (€34m) tie-up that classified as a reverse takeover. Hvivo is a clinical trial business that can accelerate drug and vaccine development.

The company previously said it would restart a project whereby humans will be deliberately infected with a coronavirus as part of efforts to develop a vaccine to Covid-19.

The project was originally suspended by Hvivo after concerns there was insufficient market demand for the product.

Meanwhile, scientists in Britain began clinical trials of a potential Covid-19 vaccine on Thursday as other vaccine developers across Europe also stepped up work on experimental shots against the disease caused by the new virus.

A team at Britain’s Oxford University dosed the first volunteers in a trial of their vaccine – called “ChAdOx1 nCoV-19” – while Italy’s ReiThera, Germany’s Leukocare and Belgium’s Univercells said they were working together on another potential shot and aimed to start trials in a few months.

Britain’s GSK and France’s Sanofi last week announced a similar agreement to develop a Covid-19 vaccine, with trials starting in the second half of the year.

As many as 100 potential Covid-19 candidate vaccines are now under development by biotech and research teams around the world, and at least five of these are in preliminary testing in people in what are known as Phase one clinical trials. – Additional reporting by Reuters