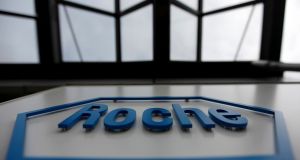 Roche said it aims to have its test available by early May.

Roche Holding developed an antibody test for Covid-19 that it says it plans to start selling early next month, adding another of the diagnostic tools experts think will be needed to lift social-distancing measures put in place around the globe.

The test will probe blood samples for antibodies that show whether a person has been infected by the new coronavirus, the Basel, Switzerland-based company said in statement. Monthly production could reach the high double-digit millions by June.

“We will have a very, very steep ramp up,” said Thomas Schinecker, Roche’s head of diagnostics, in a phone interview.

It plans to adopt the same high-intensity approach to making this test as it has been using to churn out its molecular tests, which have been around since January. “We are working 24 hours, seven days a week.”

Roche shares rose as much as 2.5 per cent early Friday in Zurich, and they’ve gained 23 per cent over the past 12 months.

Antibody testing is crucial to help identify people who have already been infected, maybe even unknowingly, and better understand the pandemic’s true scope.

A wide testing campaign could help pinpoint those who are presumably immune to the new coronavirus and can start rebuilding shattered economies. And it can also be used in tandem with other tests that look for the virus in a person’s nose or throat.

Dozens of smaller companies from Asia, Europe and North America have already introduced antibody tests, or are in the process of validating kits, which can range in complexity from types that need lots of laboratory resources to a streamlined version that’s akin to a take-home pregnancy test. Eurofins Technologies announced Friday it has received Europe’s CE mark for some antibody tests.

The accuracy of the antibody tests has been a point of concern. Countries including the UK, Spain and the Czech Republic ordered large numbers of early versions of the tests, only to later acknowledge that the kits they’d bought weren’t reliable enough to be used widely.

The tests are bad at diagnosing people with the virus early on, since the body needs a week or more to build up large amounts of antibodies. And if they’re not sensitive enough, they can misread antibodies from other viruses as a past Covid-19 infection.

Roche said it aims to have its test available by early May in countries accepting Europe’s CE mark and that it’s working with the US Food and Drug Administration to gain permission for emergency use. It plans to publish figures about how reliable its test is when producing positive and negative results closer to the product’s launch.

The test will be available to hospitals and reference laboratories that have Roche’s “cobas e” device, a fully automated system that can produce 300 results per hour. One test takes about 18 minutes, the company said. – Bloomberg