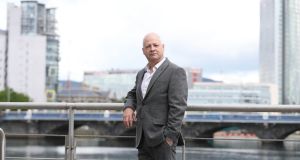 Peter Keeling, Founder and CEO of Diaceutics. the firm reported revenues of £4.4 million (€5 million), up by 34 per cent on the same period in 2018. Photograph: Kelvin Boyes

Irish data analytics company Diaceutics reported a 34 per cent jump in half-year revenues in its maiden set of results as a publicly listed company.

In the six months to June 30th, Diaceutics, which works with pharmaceutical firms on diagnostic testing and data analytics to bring more personalised medicine to patients, reported revenues of £4.4 million (€5 million), up by 34 per cent on the same period in 2018.

Back in March, the analytics company raised £17 million (€18.9 million) through a listing on London’s AIM market, citing a desire to obtain faster access to growth capital.

“We decided to move to AIM to continue our growth trajectory by developing our product and services offering which is focused on better testing and better treatment in the global pharmaceutical industry,” said Peter Keeling, chief executive and founder of Diaceutics. “We have seen good growth since we came to market and continue to work hard on expanding the data lake and increasing our international footprint. I reaffirm our outlook for the year remains unchanged.”

On Brexit, Mr Keeling said that, given the international nature of the company’s business, he doesn’t expect it to be an issue. However, with operations in Dundalk and Belfast, he said it could have an impact on the human side of the business.

Diaceutics saw its number of clients jump by 35 per cent, up from 20 to 27 in the first half of the year, and it supported 38 therapy brands in 16 markets during the first half – an increase of 73 per cent from the first half of 2018. It also continued to expand its geographic reach, particularly in Asia, as it acquired additional data on 16 million patients, bringing the total patient representation in the data lake to 126 million patients across 19 different countries.