A US judge on Monday ordered Johnson & Johnson to pay $572.1 million (€515 million) to the state for its part in fuelling an opioid epidemic by deceptively marketing addictive painkillers. Video: Reuters 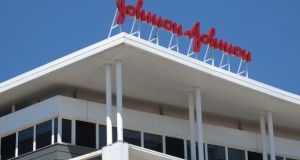 A US judge on Monday ordered Johnson & Johnson to pay $572.1 million (€515 million) to the state for its part in fuelling an opioid epidemic by deceptively marketing addictive painkillers.

The fine was substantially less than investors had expected, driving up J&J’s shares.

The state’s attorney general had filed the lawsuit, seeking $17 billion to address the impact of the drug crisis on Oklahoma. It had been considered a bellwether for other litigation nationwide over the opioid epidemic.

“The expectation was this was going to be a $1.5 billion to $2 billion fine,” said Jared Holz, healthcare strategist for Jefferies & Co. “$572 million is a much lower number than had been feared.”

J&J said it would appeal the decision.

Shares of J&J were up 2 per cent in extended trading following the decision, after an initial gain of more than 5 per cent. Other drugmakers that sell opioid painkillers and are defending against similar lawsuits also rose after-hours, including Teva Pharmaceutical Industries Ltd up 2.6 per cent, and Endo International Plc, up 1.4 per cent higher.

Opioids were involved in almost 400,000 overdose deaths from 1999 to 2017, according to the US Centers for Disease Control and Prevention.

Since 2000, some 6,000 Oklahomans have died from opioid overdoses, according to the state’s lawyers.

Roughly 2,500 lawsuits have been brought by states, counties and municipalities nationally seeking to hold drugmakers responsible for opioid abuse nationwide. Oklahoma’s case was the first to go to trial. Some drugmakers have chosen to settle cases.

In holding J&J liable after a seven-week, non-jury trial, Judge Thad Balkman of Cleveland County District Court in Norman, Oklahoma, said the state proved that J&J’s misleading marketing and promotion of its Duragesic and Nucynta painkillers created a public nuisance.

“The opioid crisis is an imminent danger and menace to Oklahomans,” Judge Balkman said.

Oklahoma wanted J&J to help it address the epidemic for the next 30 years by funding addiction treatment and prevention programs.

Balkman said in his written ruling that the award covered only one year of addressing the crisis because Oklahoma did not demonstrate the time and costs needed beyond that.

Lance Lang, a 36-year-old recovering user of opioids turned activist in Oklahoma City, said it was “short sighted” for the judge to have only ordered funding for a year. “There’s going to be people struggling with this for years,” he said in an interview.

J&J said it will ask that the award be put on hold during an appeal process that could stretch into 2021. The company also said Oklahoma failed to show that its products and activities had created a public nuisance.

“You can’t sue your way out of the opioid abuse crisis,” Sabrina Strong, a lawyer for J&J, said at a news conference after the verdict. “Everyone must come together to address this. But J&J did not cause the opioid crisis.”

‘Accountable for deaths and addictions’

The case was brought by Oklahoma Attorney General Mike Hunter, who alleged that J&J’s marketing practices helped fuel the opioid epidemic by flooding the market with painkillers.

“Johnson & Johnson will finally be held accountable for thousands of deaths and addictions caused by their actions,” Mr Hunter said.

The trial came after Oklahoma had resolved claims against OxyContin maker Purdue Pharma LP in March for $270 million and Teva in May for $85 million, leaving J&J as the lone defendant.

The verdict came as two Ohio counties prepare for a scheduled October trial before a federal judge in Cleveland. About 2,000 lawsuits out of some 2,500 filed nationwide are consolidated in the case in Cleveland.

Endo International Plc and Allergan Plc last week agreed to pay $15 million to avoid going to trial in October in a case by two Ohio counties, subject to court approval.

Some plaintiffs’ lawyers have compared the opioid cases to litigation by states against the tobacco industry that led to a $246 billion settlement in 1998.

Joe Rice, a lead plaintiffs attorney for municipalities in the federal litigation, said if the Oklahoma award were extrapolated to other states, it could mean an annual abatement cost of around $38 billion.

“It does indicate that if I’m in the pharmaceutical business, I’ve got to think long and hard about annual payments of my share of that,” he said.

The judge overseeing the federal litigation in Ohio has been pushing for a global settlement.

J&J, which is among multiple pharmaceutical companies that are defendants in the federal litigation, said it remains “open to viable options” to resolve the Ohio case, including through settlement.

During the Oklahoma trial, lawyers for the state argued that J&J carried out a years-long marketing campaign that minimised the painkillers’ addiction risks and promoted their benefits.

The lawyers called J&J an opioid “kingpin” and argued that its marketing created a public nuisance as doctors over-prescribed the drugs, leading to a surge in overdose deaths.

Teva said the ruling supported its rationale for settling the case before trial, and said it was preparing to defend itself in the upcoming trial in Ohio.

Purdue, which is also among the defendants in the Ohio litigation, did not immediately respond to a request for comment.