Ciarán Murray – an Icon of leadership in pharma sector 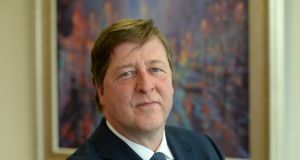 Icon may not be a household name in Ireland but it’s a global powerhouse in the pharmaceuticals sector, with operations in 37 countries. And all of it is run from a spacious modern office block nestled among the trees of a south Dublin business park, overlooking Leopardstown Racecourse.

For all its relative seclusion, Icon’s HQ is not in some dusty backwater. Microsoft’s gleaming new EMEA headquarters sits around the corner. And beyond the trees lies Central Park, one of the fastest growing corporate hubs in the city, just yards from the M50.

Ciarán Murray is not a racing man. Indeed, you get the impression that he’s not a man comfortable with taking chances. He took over at the helm when the fast-growing clinical trials group hit a rare blip in 2011. He knew the company inside out, having joined as chief financial officer six years earlier.

Having got the business back on track, he has overseen its continued expansion to become one of the major players in a rapidly growing sector serving the pharmaceutical and medical device sectors.

When he was appointed, Icon was making $38.6 million profit on $1.3 billion of revenue. Last year, where he stood down as CEO, the company reported $335.4 million in profit on $2.4 billion of sales.

He is being honoured for that achievement today with the RDS Gold Medal for Industry. He joins an illustrious role of previous winners of the annual accolade, including Peter Sutherland, Michael Smurfit, Sir Anthony O’Reilly, former Intel boss Craig Barrett, Pearse Lyons and Willie Walsh.

But there was nothing inevitable about his success back in 2011.

“We had a wobble,” Murray says, retaining the soft Northern accent of his Belfast birthplace, despite living in Dublin for more than 40 years.

“I think we had seven quarters of sequentially declining revenue which was the only time in our history. That accumulated in the third quarter of 2011 with us posting our first and only quarterly gap loss. It wasn’t significant but psychologically...

“It kind of came at the same time as the global financial crisis when customer budgets were tightening.” The downturn also coincided with a warning letter from the US regulator, the Food and Drug Administration, over concerns about quality of some of the work it was carrying out.

“I think, two things happened really,” says Murray. “The company grew really, really quickly geographically, different services and things. Maybe we didn’t understand [them] as much as we understood phase 2 and phase 3 [trials].”

A trained accountant, Murray was concerned initially over his lack of a clinical background. But it quickly became apparent to him that much of Icon’s problem was that it had simply outgrown its management capability.

He did two things. Taking what had effectively become six semi-autonomous businesses, he centralised management in Dublin and simplified the structure, stripping out layers of middle managers. The focus, he says, was on removing internal conflicts and improving accountability to give customers a more “seamless offering”.

And, in what was a controversial move at the time, he also discarded Icon’s Irish stock market listing. Hardly any stock traded in Dublin, he says, and the nexus for the business was US-focused. The Irish listing cost money and imposed rules that made little sense at times to US investors.

I don’t overcomplicate things. I’d say it’s collegiate to a point. You know. I believe in the teams

Murray moved to New York to get close to the customers who accounted for 80 per cent of Icon’s business. He took a one-year lease on an apartment: in the end, he stayed there for most of the next six years.

“We invested heavily in technology and innovation to speed up the operation. The whole thing here is, if you can do a clinical trial faster and more efficiently, you improve the chances for a successful outcome and, if you are going to fail, you fail faster.

“These drugs are on a 20-year patent so if you can shave months on a billion dollar drug, you can make your customer a lot of money.”

One of his first priorities was to invest in education. First, the company worked with the UCD Smurfit School to design what he calls an “Icon-specific mini-MBA”.

“While we had great scientists, they were hopeless at managing budgets and customers and stuff like that,” he recollects. The Smurfit course aimed to develop these company executives as business leaders and the company has, to date, put about 1,500 of its people through the course.

He also worked with the UCD medical school to develop a post-graduate course in clinical research to source the staff the company needs to drive its ongoing expansion.

His management style is, he says, “direct”. He returns regularly to his preference for keeping things “simple”. “I don’t overcomplicate things,” he says. “I’d say it’s collegiate to a point. You know. I believe in the teams.”

He’s no fan of committees, though. Having clear objectives and a focus on what the customer and the market wants is important to him, as is honesty “about your capabilities” and “in your communication” with staff.

The modern nature of global clinical trials means the company’s activities are spread fairly evenly between the United States and Europe, with the rest of the world accounting for about 20 per cent. But the US is where most of its commissioning customers are – between 65 and 70 per cent.

“We’re just like an American clinical research organisation,” he says, adding, with a smile, “culturally more sensitive and aware, and better looking and more charismatic”.

Murray gives much of the credit for Icon’s success to the group’s “visionary” founders, Dr Ronan Lambe and Dr John Climax, who saw the potential for outsourced clinical trials at a time when most big drug companies were focused on keeping research and development in-house.

Climax is still on the company’s board, Lambe stepped down earlier this year even as Murray took a step back himself. After six years as chief executive, he became executive chairman in 2017 with Steve Cutler moving into the CEO role. And, at this year’s annual meeting of shareholders, he moved into the more orthodox non-executive role as chairman.

So what does he see as his major successes? “It depends who you ask,” he quips. “The shareholders would say they liked the $4 billion I added to the market capitalisation of the business.”

For himself, he sees it more as a number of small achievements rather than a standout landmark.

The group is unique among its peers – one of the big four full service clinical trials groups but the only one based outside the US. And it is proud of that heritage. All the meeting rooms in its Leopardstown headquarters are named after either Irish writers or places. And Murray considers retaining the group’s Irish identity among his major achievements at the group.

I changed jobs a lot. I wanted different experience and I think, in accounting, you can get pigeon-holed, so every job I had was different in terms of broadening my experience

“There was a danger at the start that we’d get taken over and not be Irish anymore,” he says. “So keeping us Irish and independent [was important].”

And though he was effectively living in the US for much of the time, and was consistently one of Ireland’s highest-paid executives (benchmarked, he notes, against his peers who were all leading US corporations), he never considered relocating for tax purposes.

“It’s a pet thing of mine. People who live here should pay their taxes here,” he says.

Like his predecessors at Icon, Murray has been resolutely low key. This is his first business interview. “It’s a culture thing,” he says. “It’s easy to blow your trumpet when times are good. But, let’s face it, the wheel turns and everything’s cyclical . . . what do you do when things get tougher, go quiet and run away?”

That his salary appeared to be the only thing people were generally interested in reporting confirmed him in his decision.

“I paid 52 per cent of my salary in tax back in those days from money I was earning abroad. So, by the time we got [the company back on track] I was just pissed off with the press.”

Murray moved to Dublin from Belfast as a teenager. He joined Coopers & Lybrand – now part of PricewaterhouseCoopers (PwC) – after completing a BComm at UCD.

He marked himself out as slightly different when, on completing his training, he decided to venture abroad. And rather than following the well-worn Irish trail to the UK, the US or Australia, the young accountant headed for Milan with Coopers & Lybrand.

There, he made the transition from practice into industry, joining the Kraft food group. After a stint with them in Italy and the UK, he moved home to a job with C&C before switching to technology group Novell and then to Northern Foods.

“I changed jobs a lot,” he says. “I wanted different experience and I think, in accounting, you can get pigeon-holed, so every job I had was different in terms of broadening my experience.”

From Northern Foods, Murray returned to the tech sector, with his first finance director role at a small family-owned Irish company, Codec.

There were 2,800 people when he joined as chief financial officer – his first senior role at a publicly-listed company. Today, Icon has close to 14,000 staff in 93 offices across the globe. About 1,000 of these are in Dublin.

So having stepped away from the intense world of the global CEO, what now for Murray?

Aside from his role as chairman at Icon, he has joined the board of the Ireland Funds – one of Ireland major philanthropic groups that has raised more than $600 million for initiatives on both sides of the Border – and the advisory board of the the UCD Michael Smurfit Graduate Business School “sort of out of interest and to give back”.

He retains an interest in healthcare, particularly in how technology can improve care and, importantly, reduce costs.

“I mean one of my big fears is that science is getting really, really good on medicine . . . but it’s getting really expensive and somebody has to pay the bill at the end of the day. There are a lot of ethical and economic issues around that.”

First and foremost though, he is spending time with his children. A first-time dad to 18-month old twins, their arrival was a major factor in his decision to step down at what he acknowledges is a young age – even if this new role is much harder than he had imagined!

“The true answer is, look, I’m happy enough at the minute. I worked very hard for those years and I’m enjoying taking it a bit slower.”

CV
Name: Ciarán Murray
Age: 56
Position: Chairman and former chief executive of Icon, the clinical trials group.
Why he is in the news: He is receiving the RDS Gold Medal for Industry in recognition of his exceptional impact on Irish industry and commerce.
Family: Married to Denise with two children.
Interests: He loves travelling despite all the international commutes in his working life.
Something you might expect: He is a past chairman of the Association of Clinical Research Organisations, which represents the clinical trials industry globally.
Something that might surprise: “For a capitalist, I wouldn’t be the most capitalist capitalist you’re ever going to meet. I come from Belfast, west Belfast and I have a sense of social justice, a softie, leftie-centrist kind of typical Irish politics.”