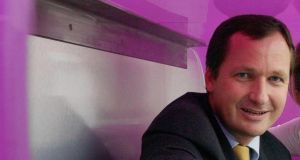 Cathal Friel, who has taken over as chief executive at Venn Life Sciences following an agreement to merge it with his company, Open Orphan. Photograph: Fennell Photography

The move comes as Venn issued a profit warning alongside results for 2018.

Shares in Venn were suspended on the London AIM market on Friday morning at the request of the company as it announced a merger of the business with Open Orphan.

The all-share transaction will see Venn issue new shares to meet the £5.7 million sterling cost of Open Orphan. The company said that the shares would be issued to Open Orphan’s shareholders “with reference to a relative value of Venn of approximately £4 million”.

That would indicate a 58/42 split in ownership of the enlarged group in favour of Open Orphan. However, shareholders voting on the deal in mid-June are also going to be voting on a fundraising to new and existing shareholders that could dilute those stakes.

The company will also change its name to Open Orphan, subject to shareholder approval.

Praising the outgoing chief executive, Tony Richardson, he said the business had been undercapitalised over the last year or two. “It’s a great team and Tony Richardson has done a fabulous job in putting it together but it has struggled to raise funds,” he said.

Mr Friel said that about 55 per cent of all new drugs coming on to the market in Europe were for the treatment of rare diseases. Fifteen years ago, he said, there were none.

“This is a very attractive space,” said Mr Friel, explaining the thinking behind the deal. The business will focus on Europe and on the area of pharma consultancy services.

He said the company would be pursuing an aggressive expansion strategy and had already identified a number of targets that he said could be “bolted on very rapidly” to double current revenues to around £30 million in the short term.

Mr Friel is a former director of Merrion Capital and Fastnet Oil & Gas – which reversed into Amryt Pharma in a similar exercise – and becomes chief executive company with immediate effect. Mr Richardson, will remain on the board of the merged company as corporate development director.

Mr Friel had been non-executive chairman of the company since late last year when Venn signed a strategic collaboration agreement with Open Orphan as part of its effort to assume a market leading position in outsourced development of treatments for rare diseases.

He will be replaced as chairman by Prof Brendan Buckley, a former chief medical officer at clinical trials group Icon, who also joined the Venn board last December. He is also a founding shareholder and director of Open Orphan.

Mr Friel and his wife, Pamela Iyer, are the largest shareholders in Open Orphan, holding a combined 47.4 per cent shareholding, according to documents filed at Companies Office.

Prof Buckley has a 10 per cent shareholding in Open Orphan.

John Given, a former senior partner at A&L Goodbody, who has also worked at pharma group Elan and was a founder and executive chairman at listed pharma portfolio investor Malin, has a 30 per cent shareholding in Open Orphan through his Crow Rock Capital vehicle.

However, it is understood that Mr Given, who specialises in M&A, is not expected to join the board of Venn.

Separately, Venn published results for 2018 showing that it had fallen back into the red. The company reported a loss as measured by earnings before interest, tax, depreciation and amortisation (Ebitda) of €1.06 million before exceptionals compared with an Ebitda profit of €960 million in 2017. Total revenue was down to €14.6 million from €17.8 million a year earlier.

The company said that, in 2019, it had experienced “a continuation of prior-year trends, with low utilisation, resulting in revenue and Ebitda being behind management forecasts for the year to date”.

Despite expectations of an increase in revenues and profitability over coming months, the company’s directors said they “expect additional financial resource to be required in order for the company to successfully execute its growth strategy”.

The results were published just before the announcement of the reverse takeover.

In the results, Mr Richardson said Venn had played a “pivotal role in the development of a successful drug for the treatment of a rare medical condition” though he said he could not identify the client company.

“This is the culmination of three years’ work and provides a critical proof point regarding Venn’s drug development capabilities,” he said.