Perrigo criticises Revenue move to reap back tax of €1.64bn 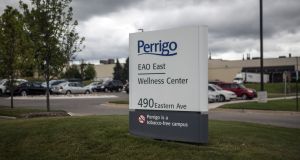 Over-the-counter drug specialist Perrigo has once again hit out at the Revenue decision to pursue it for €1.64 billion in back taxes.

Speaking to analysts at its annual investor day, recently appointed chief executive Murray Kessler said the Government had still not explained why the charge arose.

The €1.64 billion tax bill, the largest ever issued by Revenue after the Apple case, relates to a dispute over the amount of tax paid on the sale by Elan of its stake in a major drug in 2013, the multiple sclerosis drug Tysabri.

“The Irish Government has still not made it clear why Elan was wrong,” said Mr Kessler, who took over as Perrigo chief executive last October just a couple of months before the Revenue action.

“We believe that the Irish Government, and the Revenue, violated our legitimate expectations to rely on prior audit and 20 years of history and [that] they improperly even put this tax forward,” he told analysts. “So we are in a judicial fight first to see if it is even legal to assess the tax, not whether the tax is wrong.”

Mr Kessler was responding to a question from David Steinberg of Jeffries towards the end of a four-hour call in which the issue had not been mentioned.

He said the judicial review was likely to take almost a year to reach its conclusion.

“If we lose [that case] in a year or so, then the tax appeal process begins,” he said. “So it will be a long process.”

Perrigo was separately hit with an $873 million US tax demand by the US Internal Revenue Service at the end of April, also relating to Tysabri. In this case, US tax officials are claiming that in the 1996 acquisition of Athena Therapeutics, the US company whose research ultimately led to the development of the MS drug, Elan paid too little in royalties for intellectual property.

Perrigo has said it will also appeal that ruling

Speaking at the investor day on Thursday, Mr Kessler said both tax offices were claiming essentially the same income. “There are treaties that govern transfer pricing and it is hard for the IRS to win,” he said.

Mr Steinberg had asked why the company had made no provisions yet for either tax charge.