£2.4m hotel to open in Ballycastle ahead of Open golf championship

Enterpreneurs behind Salthouse hotel and spa received £245,000 from Invest NI 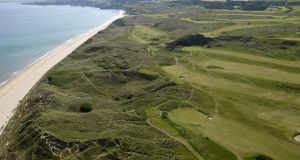 Tourism chiefs hope the return of the Open championship to Royal Portrush, after 68 years, will deliver an £80 million economic windfall for Northern Ireland.

Two Co Antrim entrepreneurs are hoping to hit a hole in one in the run-up to the biggest sporting event in Northern Ireland this year after investing £2.4 million (€2.72 million) to develop a new hotel in Ballycastle in advance of the 148th Open Championship.

The Salthouse hotel and spa is scheduled to open shortly in the heart of the causeway coast as preparations continue for the return of the Open golf championship to Royal Portrush Golf Club in July.

Ballycastle’s new four-star, 24-bedroom hotel, which has been developed by the Denis McHenry and Therese McHenry Partnership, has received £245,000 in financial support from the regional business development agency, Invest NI.

Denis McHenry, owner of the Salthouse, said a “significant investment” had been required to develop the hotel and the funding from the agency had enabled him to realise his “business ambitions”.

“We hope the hotel will appeal to a wide range of visitors from Republic of lreland, Great Britain, Europe and USA. Golf tourism will of course be a major target market for us so we are delighted to have the hotel ready in advance of the Open. We will be opening for bookings in late June,” Mr McHenry said.

Tourism chiefs hope the return of the Open championship to Royal Portrush, after 68 years, will deliver an £80 million economic windfall for Northern Ireland this year.

A glittering field of 156 of the world’s top golfers, including home-grown hero Rory McIlroy, will compete at Portrush for the final major championship of 2019.

Record-breaking ticket sales for the event will see 215,000 spectators travel to the small seaside town of Portrush from July 14th to July 21st and it will also be broadcast in more than 150 countries to a potential audience of 600 million households.

John Hood from Invest NI believes the Salthouse hotel will be a “valuable addition” to the tourism sector in the north coast.

Mr Hood said: “We have offered £245,000 to support the construction of the hotel, which will also create 45 hospitality jobs in the causeway coast and glens region generating over £900,000 annually in additional salaries.

“This welcome investment is also the fourth hotel development progressing outside of Belfast with our assistance and is a positive example of Northern Ireland’s tourism strategy in action.”

1 Basic income for all: Has the Covid crisis given us a new economic model?
2 Chris Johns: Economies may enjoy ‘roaring twenties’ if ministers learn lessons
3 Wet pub openings fuelled rise in Irish Covid infection rates – report
4 Only way is up for Stripe as valuation skyrockets
5 How long can Government afford to keep State pension age at 66?
6 Direct sea routes to Europe offer certainty in choppy Brexit waters
7 Ten of the most mysterious aircraft disappearances
8 Why we should ban autonomous cars now
9 ‘Make plans but don’t hold on to them too seriously’
10 So you want to invest in the stock market: what will it cost?
Real news has value SUBSCRIBE