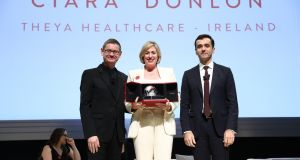 Irish entrepreneur Ciara Donlon has been named Laureate for Europe at the 2017 Cartier Women’s Initiative Awards.

Ms Donlon, who is founder and chief executive of Theya Healthcare, received the award at the ceremony in Singapore. She was one of six laureates selected by an independent international jury, with almost 1,900 applicants considered from over 120 countries.

The prize money awarded to each laureate’s business now stands at $100,000. Each 2017 laureate is granted a place on an Insead Executive Programme, receives a year of personal mentoring and can take advantage of networking opportunities.

“I’ve always believed in Theya Healthcare because I know we can make a real difference to patients, but to have a prestigious organisation like the Cartier Women’s Initiatives Awards say that they believe in us too is such an incredible validation of what we do,” she said.

“Not only will the prize funding enable us to scale globally more quickly than we otherwise could, but the Insead training, as well as mentoring, network access, and media exposure will open so many new doors for us.”