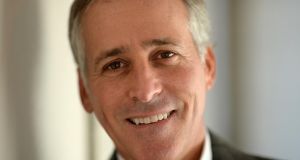 The group, which is domiciled in Ireland following its acquisition of Elan Drug Technologies back in 2011, reported 31 per cent growth in revenues last year and sharply narrowed its net loss.

Details published in the company’s annual report confirm that basic executive pay at the group led by chairman and chief executive Richard Pops rose about 3.4 per cent. That brought Mr Pops’s basic salary up to $911,228 (€857,425).

He also received stock award and options valued at just over $7 million dollars and performance-related pay of $1.64 million. Both these figures were lower than in the previous two years. The stock awards will have been hit by Alkermes share price, which fell sharply at the outset of 2016 on a failed clinical trial and traded generally lower throughout the year than in 2015.

Chief financial officer James Frates was paid a total of $2.68 million compared with $3.15 million a year previously while Irish-based company president Shane Cooke, who joined Alkermes from Elan, received a total of $4.14 million, down from $5.1 million in 2015.

Alkermes is focused on diseases of the central nervous system.