Abbott to buy medical device maker at $51 a share, $5 less than its previous offer 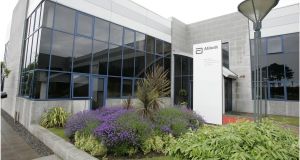 Abbott Laboratories has agreed to buy Alere Inc at a lower price than previously offered, closing a legal battle over the merger between the two health companies, the Financial Times has reported, citing unidentified people close to the matter.

Abbott, which has held a base in Ireland since 1946, employs approximately 3,000 people here across 10 sites.

In February of last year RTÉ reported that Alere was to triple the size of its Galway operations, resulting in the creation of 40 jobs. At that time, the company’s operation in Ballybrit was said to employ over 100 people.

Abbott agreed to buy Alere at $51 (€48) per share rather than the previous offer of $56, the FT reported on Friday. Abbott had sued to break up its earlier $5.8 billion takeover of medical device maker Alere, arguing the deal target hid material information about legal and regulatory problems. The transaction has been dragging on for more than a year as Alere disclosed subpoenas on bribery investigations, restated earnings and recalled products – escalating to the Abbott suit in December.

The new agreement, valuing Alere’s equity at $4.4 billion, was expected to be announced imminently, the FT reported.

The offer is 21 per cent more than Alere’s closing share price on Thursday of $42.31. Abbott shares closed on Thursday at $42.67. Markets in the US are closed for the Good Friday holiday. – (Bloomberg)