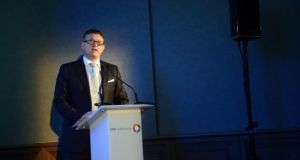 Liam FitzGerald: oversaw 30 acquisitions during his time as chief executive of UDG between 2000 and 2016

Liam FitzGerald, the former chief executive of UDG Healthcare, has been named as chairman-designate of Gowan Group, succeeding Michael Maughan when he steps down as chairman in May.

The Gowan Group is owned by the Maughan family, which holds the Irish franchises for the Peugeot and Honda brands. It recently completed a deal to acquire Opel Ireland.

Mr FitzGerald oversaw 30 acquisitions during his time as chief executive of UDG between 2000 and 2016, a period in which the company’s market value soared by more than 500 per cent and its earnings grew at a compound annual rate of more than 20 per cent.

He stepped down as chief of UDG four years ago and was later hired by New York private equity firm Clayton, Dubilier & Rice to help drive healthcare investments.

“I’m delighted to have the opportunity to join the board of Gowan Group. It is a fine, well-managed family business, with a strong reputation in the market and a great portfolio of brands,” said Mr FitzGerald.

Gowan Group has been involved in motor distribution in Ireland for 50 years, importing Peugeot vehicles since 1969 and Honda vehicles since 1984. Previously, Gowan Group had also distributed Citroën cars in Ireland, through its subsidiary Gallic Distributors, but lost that franchise in 2009, when it moved back to the control of the French parent before ultimately returning to a franchise operation run by the UK-based IM Group.

Along with its motoring operations, the group also owns a retail dealer network that sells Kia and Opel vehicles, and provides after-sales service for Citroën. It is also involved in the distribution of household electronics and kitchen products, through its KAL division, where it holds franchises for brands such as De Dietrich, Nordmende, AGA, Franke, Sharp, Elica, and KitchenAid. It also owns Senator Windows.