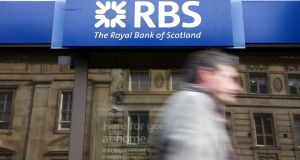 RBS will become the only company in the FTSE 100 index with women in both its top two executive positions.

Alison Rose will become the first woman to lead one of the UK’s top banks in November, after being confirmed as the successor to the Royal Bank of Scotland chief executive Ross McEwan.

The state-owned lender will also become the only company in the FTSE 100 index with women in both its top two executive positions, following Katie Murray’s appointment as chief financial officer last year.

Howard Davies, RBS chairman, said: “I am delighted that we have appointed Alison as our new CEO. She brings extensive experience and a track record of success from her previous roles at the bank.

“Following a rigorous internal and external process, I am confident that we have appointed the best person for the job.”

Ms Rose, who currently leads RBS’s commercial and private banking business, had long been seen as the favourite to succeed Mr McEwan, particularly after she was made deputy head of the holding company that owns most of RBS’s businesses last year.

However, Mr Davies had been keen to stress the bank would carry out a thorough search, and she saw off competition from rivals including RBS chief operating officer Mark Bailie and Ian Stuart, the head of HSBC’s UK business.

Mr McEwan, who announced his resignation in April after five-and-a-half years in charge of RBS, will take over as chief executive of National Australia Bank on December 2nd this year.

He was credited with largely completing the decade-long restructuring of RBS, which was briefly the world’s biggest bank but came close to collapse and was bailed out by the government during the financial crisis.

Although RBS has solved many of its issues, Ms Rose will take over at a challenging time for British banks.

Profit margins have been hit by competition in the mortgage market, economic uncertainty has caused a slowdown in business lending, and technology groups and payments companies are threatening to move into more of banks’ traditional business lines.

The job of RBS chief is further complicated by the fact that the government still owns a majority stake in the bank after its bailout.

Theresa May’s government had committed to off-loading the stake by 2024, but progress has been hampered as Brexit-related uncertainty weighed on RBS’s share price.

Ms Rose said: “This is an exciting time as we enter a new chapter for this bank. Our industry is facing a series of challenges; from the ongoing economic and political uncertainty to shifts in the behaviour and expectations of our customers, driven by rapid advances in technology.

“It will be my priority to make sure we are ready to meet these challenges and build the best bank for families, businesses and communities.”

Ms Rose will receive a base salary of £1.1 million per year and a fixed share allowance of the same value, plus long-term performance-linked awards worth up to 175 per cent of salary.

Her base salary will be higher than Mr McEwan’s £1 million, but she will receive a lower pension allowance of 10 per cent of her salary, in line with new corporate governance guidelines.

The bank said the package “continues to represent a restrained pay position in terms of comparable roles”. Copyright The Financial Times Limited 2019