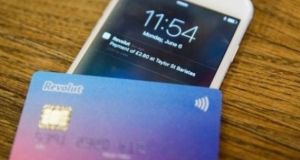 Revolut, founded in July 2015 by Nikolay Storonsky, has raised $340 million in funding to date

Mr Heneghan, who has over 20 years banking experience, worked in a number of roles at Ulster Bank including head of risk management and director of customer experience and products. , has been named as Revolut’s new chief executive for the Republic. He replaces William Keane, who departed the company less than a year after being appointed as country manager for Ireland in 2017 to lead a new start-up.

The appointment of Mr Heneghan coincides with Revolut’s recent decision to apply for an electronic money licence from the Central Bank of Ireland. In doing so it is following in the footsteps of Facebook, Stripe, Soldo and Prepaid Financial Services in obtaining the licence which allows them to issue payments across the European Union under passporting rights.

Revolut, which has over 300,000 customers in Ireland and over 7 million globally, has recently advertised for a number of roles in the Republic, including for a new chief financial officer and a chief risk officer.

Currently valued at $1.7 billion, the company is looking to raise an additional $500 million this year.

The company recently announced plans to take on 400 new staff in order to strengthen its customer service and compliance departments to combat problems linked to its growth.

Revolut, which obtained a full banking licence from the Bank of Lithuania last year, on Wednesday also announced the appointment of Virgilijus Mirk?s to lead its operations there.

“As banking veterans, Virgilijus and Joe come with a huge amount of experience growing businesses in highly regulated environments as well as building solid relationships with regulators. We’re really pleased to have them on board,” said Richard Davies, Revolut’s group chief operating officer.