Financing laws broken by bank on 23 million occasions in six years, it is alleged in court 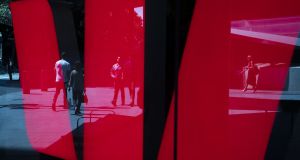 Pedestrians are reflected in a Westpac logo in Sydney. Australia’s financial crime fighting agency has accused the bank of the biggest breach of money laundering laws in the nation’s history. Photograph: Brent Lewin/Bloomberg

Australia’s financial crime fighting agency has accused Westpac of the biggest breach of money laundering laws in the nation’s history. It alleges that the bank did not adequately monitor and report 11 billion Australian dollars (€6.8 billion) in suspicious transactions that included transfers related to potential child exploitation.

A legal case initiated by the Australian Transaction Reports and Analysis Centre (Austrac) on Wednesday detailed how the country’s second-biggest bank by market capitalisation failed to report international fund transactions worth more than A$11 billion between 2013 and 2019 in a timely fashion to the regulator, as required by law.

The bank failed to keep records on the origin of some of the fund transfers, pass information on the source of funds to other banks in the transfer chain and carry out appropriate due diligence on suspicious transactions, including payments to alleged or suspected child exploitation facilitators in south-east Asia.

“The failure to pass on information about international fund transfers to Austrac undermines the integrity of Australia’s financial system and hinders Austrac’s ability to track down the origins of financial transactions, when required to support police investigations,” said Nicole Rose, Austrac chief executive, in a statement.

Each breach of money laundering laws is liable for a civil penalty of between A$17 million and A$21 million, which leaves Westpac open to potentially crippling fines if the regulator’s claims were proved in court.

Shares in Westpac fell 3.3 in Sydney, while the broader market was down 1.4 per cent.

Westpac said it had previously self-disclosed a failure to report a large number of international funds transfers to Austrac and was taking steps to close gaps in its anti-money laundering processes.

“These issues should never have occurred and should have been identified and rectified sooner,” said Brian Hartzer, Westpac chief executive.

Scott Morrison, Australia’s prime minister, said he was “absolutely appalled” by the allegations.

The civil proceedings are the second big money-laundering case taken by Austrac over the past four years. It comes amid tightened regulatory scrutiny of Australia’s banks in the wake of a Royal Commission public inquiry into misconduct in the financial sector.

Nathan Zaia, an analyst at Morningstar, said the Austrac case would do nothing to restore the bank’s image in the wake of the Royal Commission inquiry, which highlighted many examples where profit was put above all else.

“Being accused of deficient oversight of correspondent banking relationships and oversight over money laundering and terrorism financing risks is a bad look,” he said. – Copyright The Financial Times Limited 2019