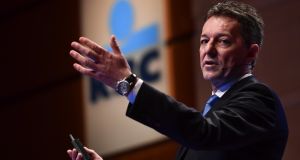 KBC Group chief executive Johan Thijs: “We’re focused on doing business, we’ve learned our lessons, we know what to do.”

The head of KBC Bank Ireland’s Belgian parent has rounded on the Central Bank of Ireland for its continued focus on the tracker mortgage scandal and lenders’ other past sins, saying this “nitty-gritty stuff” is holding back the industry.

“What is still an annoying thing is all tracker mortgage stuff and, honestly, we would recommend to Central Bank of Ireland: come on, guys, turn the page,” KBC Group chief executive Johan Thijs told analysts on a call on Thursday (audio available on KBC Group website). “We’re focused on doing business, we’ve learned our lessons, we know what to do.”

The comments come two days after Central Bank deputy governor Ed Sibley warned that bankers in Ireland and elsewhere are beginning to display echoes of pre-crisis hubris, as pressure mounts on regulators to ease back on checks and controls introduced in the past decade to prevent another crash.

Mr Thijs added on the call, as KBC Group reported quarterly results: “Let’s now stop doing all the nitty-gritty stuff, which is an administrative hampering of the development of the financial institution - and the financial market as a whole in Ireland.”

KBC Bank Ireland, which received a €1.4 billion bailout from its parent during the financial crisis, reported on Thursday that it had set €14 million aside to cover an expected Central Bank fine for its involvement in the tracker mortgage scandal going back more than a decade.

The figure was part of a wider €18 million tracker-related provision that the bank booked in the third quarter of the year, which drove a reduction in its net profit for the period to €4.4 million from €33.6 million for the corresponding three months in 2018. The wider KBC Group’s profit dipped to €612 million from €701 million.

KBC Bank Ireland is the last among five lenders in the State subject to a Central Bank enforcement investigation relating to the issue put money aside for likely sanctions. Rival Permanent TSB was fined €21 million earlier this year for its handling of the industry-wide debacle.

The Irish unit’s chief executive of seven months, Peter Roebben, struck a different tone in an interview with The Irish Times when he discussed the Central Bank’s focus on tracker-mortgage issue.

“Of course we expect a fine. It goes without saying, given the extent to what happened with trackers,” Mr Roebben said. “But we’ve no indication when the investigation will be concluded.”

The latest provision, which brings to €142 million the amount KBC has ringfenced in recent years to cover redress, compensation and other costs relating to the tracker crisis, took the shine off more positive developments seen by the bank in the third quarter.

The bank’s new mortgage lending rise 21 per cent for the first nine months of the year to €800 million, outpacing 11 per cent growth in the wider market and delivering a 11.7 per cent share of activity, compared to 10.9 per cent in 2018.

KBC has added 60,000 customer accounts so far this year, bringing its total number of customers above the 300,000 mark.

Meanwhile, KBC Bank Ireland’s impaired loans level declined to 17.4 per cent at the end of September from 35 per cent a year earlier. This was fuelled by the sale of a €1.9 billion portfolio of soured corporate and buy-to-let mortgages to US investment bank Goldman Sachs late last year and as the bank continued to restructure of problem loans and benefit from borrowers’ improved circumstances in a rising economy.

The bank freed up €7 million of provisions that had previously been set aside to cover forecast losses on bad loans.