Why did it take the Central Bank so long to get on top of this issue? 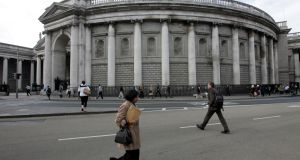 27/04/2010 NEWS Bank of Ireland and ICS were required to reinstate the tracker rates set out in the original loan documentation, and to pay redress. Photograph: Eric Luke

]The Central Bank of Ireland’s update on Thursday of its ongoing examination of tracker mortgage rates that 15 lenders offered to customers over the past decade was revelatory.

For the first time, the regulator made public the fact that some 7,100 cases of a tracker rate being denied to a customer for one reason or another had been resolved in advance of it launching its industry-wide review in December 2015.

By the end of February, this latest review had identified another 9,900 cases where customers had been impacted.

That’s a total of 17,000 customer accounts that were denied a low-cost tracker rate and the figure could rise yet further as six of the lenders in the current examination have yet to submit their figures with the Central Bank.

If you take the pre-2015 cohort of customers, some 3,624 cases had not been previously made public.

Another, 2,096 involved Bank of Ireland and its former subsidiary ICS Building Society and 1,374 concerned Permanent TSB and its former affiliate Springboard. These had been publicised.

We now know that between April 2008 and March 2009 the Central Bank conducted a desk-based review of tracker mortgage switches. Another review was conducted in 2010 but did not seek to examine contractual rights relating to tracker customers.

Bank of Ireland and ICS were required to reinstate the tracker rates set out in the original loan documentation, and to pay redress.

The Central Bank also found issues at PTSB and its subsidiary, Springboard Mortgages. PTSB paid €5.8 million in redress to the 222 customers of Springboard who were affected, and settled a fine of €4.5 million to the regulator following an enforcement investigation of its former subsidiary.

PTSB, which is 75 per cent State owned, also faces a fine relating to its own customers, and a substantial bill to provide them with redress and compensation.

Virtually all lenders in the Irish market over the past decade or so failed to offer the correct tracker rates to customers.

Was this just an unhappy coincidence or something more systemic? We’ve yet to get a proper answer to that question, in spite of the best efforts of the Oireachtas finance committee in recent hearings.

Why did it take the Central Bank so long to get on top of this issue? Why were so many cases in the pre-2015 cohort not made public?

How many people lost their homes? What redress will they be offered? Without wanting to instigate a witch hunt, which individuals have been held responsible for this “unacceptable” behaviour?

The fact that 2,600 account holders have received €78 million in redress and compensation as part of the latest examination is to be welcomed. Others will receive redress over time.

But it doesn’t make up for the stresses and strains that many of these people would have endured over the years as they sought to make ends meet. And it doesn’t touch the sides in terms of compensating the people who lost their homes.