Ulster Bank to close one in five branches in Republic 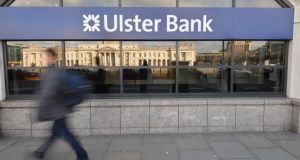 Ulster Bank plans to close 22 of its branches in the Republic by the end of September as part of a major restructuring of the business that will also result in 220 redundancies.

This means that one-in-five of the bank’s 110 branches here will close while about 8 per cent of its near 2,800-strong workforce will leave the business.

Staff were informed of the bank’s plans on Thursday and have been told that the redundancies will be voluntary-led.

Five of the branches to close are located in Dublin –Dalkey, Donnybrook, Dorset Street, Rathmines and Sandyford.

The rest are spread around the State – Ardara in Donegal, Arva and Cootehill in Cavan, Ballincollig, Blackpool, Carrigaline and Fermoy in Cork, Ballyhaunis in Mayo, Ballymote in Sligo, Briarhill and Newcastle in Galway, Carrickmacross in Monaghan, Castletroy and Newcastlewest in Limerick, Edenderry in Offaly, Edgeworthstown in Longford and Raphoe in Donegal.

The Financial Services Union described the closures, redundancies and other restructuring measures as “shocking” and said it would oppose the cuts.

FSU senior industrial relations officer Gareth Murphy, said: “Ulster Bank in the Republic of Ireland made a profit of €280 million in 2016. Its financial statement reported significant increases in business lending, mortgage drawdowns and general lending. Against this reality, the scale and severity of the cuts announced today are completely disproportionate and unjustified.”

Mr Murphy said the offshoring of some functions was also a concern. “The reduction of staffing in Ulster Bank’s risk division is worrisome, and will likely be an issue that the Central Bank will have to assess.”

The FSU reiterated its call for a Government-led forum on the future of financial services to counter what it described as the “ hollowing out” of access to banking services for many local communities.

Commenting on its restructuring plans, Ulster Bank chief executive Gerry Mallon said the changes were in response to “changing customer demand” and a switch by consumers to using its digital services.

It is understood that an average of 150 customers used the branches that have been slated to close in the past week.

“We are adapting to the changing nature of the banking and retail sectors and investing to meet our customers’ evolving needs,” Mr Mallon said.

“Ulster Bank’s investment will see us upgrade a number of branches to reflect our brand and what our customers expect from us. We will also provide two additional mobile banks, which will travel to rural areas to serve our customers, and our services with An Post will be extended to include cash and cheque lodgements for personal and business customers.

“We are also announcing the appointment of six new community banker roles, which will support vulnerable customers and will help customers to transition to digital banking channels.”

On the decision to close 22 branches, Mr Mallon said: “Closing a branch is a difficult decision which we do not take lightly, and our branch network remains an important part of how we serve our customers. However, the role of the branch continues to move toward advice and away from day-to-day transactions, with only 10 per cent of our customer interactions now happening in a branch.”