Lenders under pressure to waive interest on coronavirus-related payment breaks 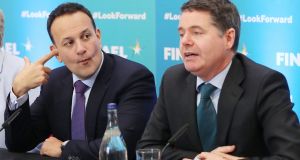 Minister for Enterprise Leo Varadkar and Minister for Finance Paschal Donohoe will this week meet the banks’ chief executives individually, as tensions mount between Government and the sector over banks’ insistence that they charge interest to customers on Covid-19 mortgage breaks.

The meetings this week are ostensibly being held under the auspices of the State’s credit guarantee scheme. But it is expected that the issue of payment breaks will also be raised after Mr Varadkar said last week he “didn’t trust” the banks and accused them of spouting “regulatory gobbledygook” as the Government pressured lenders to waive interest on coronavirus-related payment breaks.

The banks, which originally claimed they were obliged to charge interest under European banking rules before the Central Bank of Ireland subsequently clarified that they were not, are expected to defend their position at the meetings and argue that they have costs to cover.

More than 70,000 households are on Covid-19 mortgage breaks and many are expected to go into arrears when breaks end in coming months.

On Sunday, Central Bank governor Gabriel Makhlouf said on RTÉ radio that the situation regarding banks charging interest “perhaps could have been made clearer” earlier by regulators. It is understood that executives within some banks were privately satisfied with his comments.

When asked by RTÉ to comment on the Tánaiste’s assertion that he did not trust the banks, Mr Makhlouf said: “You’re going to have to ask him.”

Sinn Féin finance spokesperson Pearse Doherty, who has repeatedly raised the issue in the Dáil and pushed for a moratorium on interest, was critical of the Government and also of the banks. He said that given the State was a major shareholder in certain banks, including AIB, where it owns 72 per cent of shares, Mr Donohoe could simply “issue a direction” to it not to charge interest.

Mr Doherty also said it was “naive in the extreme” to suggest banks were not making some profits on the interest payments, beyond simply covering their costs. He suggested that it if they could not be forced to implement a total moratorium, they should at least charge lower interest to prevent making any profits from customers while they are on coronavirus payment breaks.