Some 50,000 customer had faced disruption as payments frozen amid scandal 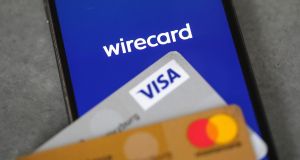 Although around 50,000 of the cards have been issued over three years, they are generally used as a one-off.

More than 50,000 users of An Post Money’s Currency Card will regain access to funds after Britain’s financial watchdog lifted a ban on the payment activities of Wirecard’s UK subsidiary.

The card is an An Post-branded prepaid Mastercard issued by Wirecard Card Solutions that allows customers to hold up to 16 different currencies.

An Post froze the pre-paid cards after the British Financial Conduct Authority, which regulates Wirecard Card Solutions Limited, last Friday ordered it to cease operating such cards due to “ongoing events in Germany concerning companies closely linked to Wirecard”.

That action came as the German fintech company was assessing whether certain subsidiaries of the business would have to file insolvency applications after a €1.9 billion hole was discovered in its accounts.

Late on Monday, the Financial Conduct Authority said the UK subsidiary could resume payment activities from midnight. A spokeswoman for An Post welcomed the FCA decision and said Mastercard was working to restore the currency card service for customers. That was expected to happen at some point late on Tuesday, once testing has been completed.

“We apologise again for the disruption to customers and are thankful for their patience,” she said.

Although around 50,000 of the cards have been issued over three years, they are generally used as a one-off, industry sources said, and are rarely topped up with more funds for regular use.

An Post was unable to given any ide aof how much money customers might have had locked on the cards.

1 Belgium helps Ireland to a Brexit boon
2 ‘My rent here is so low it’s a joke’
3 Can Grafton Street stop the flood of closures?
4 New Powerscourt Springs hotel to open in defiance of virus gloom
5 AIB to compensate another 1,100 tracker mortgage holders
6 This charming man: how Paschal Donohoe won the Eurogroup presidency
7 How to . . . move (almost) everything to your new phone
8 Bank of Ireland launches €200,000 prize fund
9 Government won’t name date for EV grants for car dealers
10 Goodbody loses a second suitor as Bank of China deal falls through
Real news has value SUBSCRIBE