Lloyds Bank CEO Antonio Horta-Osorio to step down in 2021

Portugal-native has been at the lender for the past decade 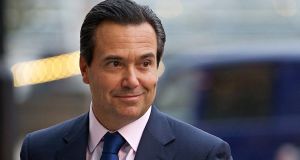 António Horta-Osório, the long-serving chief executive of Lloyds Banking Group, will step down next year after the arrival of a new chairman.

Lloyds announced on Monday that Mr Horta-Osório planned to leave at the end of June after more than a decade in charge, during which time it went from a state-owned business on the brink of collapse to a fully-privatised lender that was the steadiest performer of the UK’s major banks.

“I have been honoured to play my part in the transformation of large parts of our business,” Mr Horta-Osório said.

“I know that when I leave the group next year, it has the strategic, operational and management strength to build further on its leading market position,” he added.

His departure was announced alongside news that Robin Budenberg, a veteran banker and currently chairman of Centerview Partners, will take over as Lloyds chairman early next year. He will replace Norman Blackwell, who has chaired the group since 2014 and announced his planned exit last October.

Mr Budenberg, a former UBS banker, worked closely with the UK government on the bailout of Lloyds and other banks in 2008, and later led UK Financial Investments, the group that managed the treasury’s shareholdings.

Mr Horta-Osório, who was previously chief executive of Santander UK, is one of the longest-serving bank chief executives in Europe, and he was widely expected to leave Lloyds after a new chairman had settled in.

In a message to staff on Monday, Mr Horta-Osório said “this has, quite simply, been the job of a lifetime”.

He has been credited with leading a successful turnaround at Lloyds, which was bailed out at the height of the financial crisis, expanding its reach in areas such as credit card lending and insurance while drastically cutting costs through digitisation.

John Cronin, analyst at Goodbody, said: “He has delivered a successful strategy overhaul as well as substantive transformation from an organisational efficiency perspective. While he will be sorely missed, it is not surprising that he is planning to move on after what will be 10 years at the helm come 2021.”

Lord Blackwell wrote to staff on Monday that “we all owe [Mr Horta-Osório] an exceptional debt of gratitude”.

However, his tenure was tarnished by several historic scandals, including the payment protection insurance scandal which eventually cost Lloyds £22 billion, compared to the £3 billion expected when Mr Horta-Osório first agreed to compensate customers shortly after his arrival.