US fintech FIS to buy payment processor Worldpay for $35bn 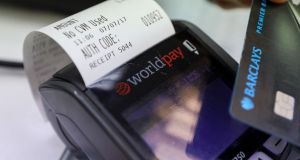 Worldpay is based in Ohio after the Vantiv deal, though it retains an international base in the UK. Photograph: Chris Ratcliffe/Bloomberg

FIS, a US-based financial services technology company, has unveiled plans to buy Worldpay in a $43 billion (€38 billion) deal that would create one of the largest providers of the plumbing and infrastructure that powers banks and payments.

The latest deal in a wave in the payments industry marks the second time the Worldpay business, which was spun out of Britain’s Royal Bank of Scotland as a condition of its bailout during the financial crisis, has been acquired.

Worldpay became the UK’s largest payments firm before it was taken over by US-based Vantiv in a $10.4 billion deal last year, after which the US company took its name.

Worldpay shareholders will receive 0.9287 FIS shares and $11 in cash under the terms of the offer. The bid values Worldpay’s shares at roughly $112, a premium of just over 13 per cent from its close last week.

In pre-market trading on Monday morning Worldpay shares were up 11 per cent at $109.60.

The combination values Worldpay at about $43 billion, which includes the payment group’s net debt of $7.7 billion. FIS shareholders will own about 53 per cent, while Worldpay holders will own the remainder.

The combined group would have generated revenues of $12.3 billion and adjusted earnings before profit, tax, interest, depreciation and amortisation (ebitda) of $4.9 billion in 2018.

“Scale matters in our rapidly-changing industry,” said FIS’s Gary Norcross, who will remain chairman of the board of directors, president and chief executive. FIS said it will look to reap $700 million of ebitda synergies from cost cutting and cross-selling over the next three years.

The deal will see Jacksonville-based FIS retain its headquarters and get to name seven directors to a 12-member board, while Worldpay will get the other five. Worldpay boss Charles Drucker will become executive vice-chairman.

FIS develops technology ranging from the core banking platforms that power retail lenders’ systems to software for asset managers. The company has grown through more than a dozen acquisitions in the last 15 years.

Worldpay specialises in services that enable merchants to take digital payments. Worldpay processes some 40 billion transactions annually in 146 countries and 126 currencies. The New York and London listed group is based in Ohio after the Vantiv deal, though it retains an international base in the UK. FIS made no mention of the UK base in its announcement.

Changing consumer habits have driven rapid growth in the payments sector in recent years, a trend which has encouraged a wave of merger and acquisition activity. Most recently, US payments processor Fiserv agreed to purchase rival First Data in a $39 billion deal.

1 Citigroup warns that markets are out of step with reality
2 Chris Johns: Past is another country when it comes to our post-pandemic future
3 ‘I’m so lucky to be in the Caribbean – a million miles from Derry Girls’
4 Michael Smurfit: ‘I asked Trump to invite me to the White House for my 80th birthday’
5 Donohoe told insurers they risked ‘irreparable damage’ to reputation
6 Small businesses are cannon fodder in zealous anti-virus experiment
7 Joint accounts: if one of us dies, can the other access the money?
8 ‘The recovery needs to be a full-scale economic renewal’
9 Ryanair expects air fares to fall when flights take off again
10 Tobacco makers still trying to make a mint from Irish menthol market
Real news has value SUBSCRIBE