Who is Ireland’s newest billionaire?

Remain supporter and donor to Britain’s Conservatives, John Armitage is a new entry 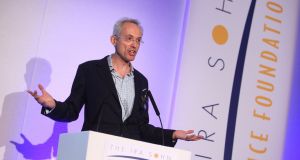 Forbes’s billionaire listing rarely throw up too many surprises; there may be some jumps and declines in the rankings, but the names tend to be fairly constant. The 2019 list mostly followed the template, with construction magnate Pallonji Mistry and private equity entrepreneur John Grayken the wealthiest Irish individuals.

But one new name was a surprise. The inclusion of John Armitage was unusual, not least because of his historically close ties with Britain’s Conservative party.

So, who is John Armitage?

Born in the UK on December 20th, 1959, Armitage is primarily known for founding a hedge fund that is among Europe’s largest. He is chief investment officer at Egerton Capital, which he established in 1994 with Irish-American financier William Bollinger.

The hedge fund based in London’s Mayfair is responsible for Armitage’s reported $1.3 billion (€1.15 billion) wealth, placing him 1,717th on the Forbes list and making him the Republic’s eighth richest person.

But it wasn’t always thus.

While the financier has been publicly quiet on the move, it might be speculated that his strong support of the European Union may have influenced the decision in the wake of the 2016 Brexit vote.

So strong was his support for the Remain side of that debate that he donated a “six figure sum” to the campaign to stay in the EU in advance of the referendum, one report said. Other reports suggest he donated a lesser amount.

Then, in advance of Theresa May’s failed election gamble in 2017, Armitage donated £500,000 to the Conservatives, second only to John Griffin, one of the founders of minicab company Addison Lee, who gave £900,000, according to a report in the Financial Times.

One of Egerton’s largest funds, the Egerton Capital Equity Fund, is registered in the Republic. With about £5.6 billion in assets under management, the fund has given investors a 6.08 per cent return over the past 12 months.

Another of its funds, registered in Luxembourg, shows large holdings in Airbus, Microsoft and American Express.

In addition to being chief investment officer, Armitage is a partner of Egerton’s UK limited liability partnership and its US entity. It is unclear how much time the fund manager spends in any one location, but he reportedly spent just shy of $18 million in February last year on a three-bedroom apartment on New York’s Park Avenue.

Before co-founding Egerton with Bollinger, Armitage worked at Morgan Grenfell Asset Management, where he began his career in 1981. He ascended the ranks of the influential institution, which was ultimately acquired by Deutsche Bank, becoming a director in 1991.

He attained a degree in Modern History from Cambridge University in 1981.

More recently, Armitage has shown his charitable side, setting up the “John Armitage Charitable Trust” alongside his wife, Catherine Armitage. Operating primarily in England and Wales, the trust has a number of areas of focus including disadvantaged children, education, medical care, arts and culture, prisoners and young offenders and religious organisations. In the 12 months to April 5th, 2018, the trust made grants of over £2.5 million available. The three largest donations made in the period went to the Harris Federation, an education charity which received £250,000, the Policy Exchange, a centre-right think tank based in London which received £100,000, and Westminster Abbey to which a grant of £100,000 was awarded.

Forbes estimates that there are nine billionaires in the Republic, with an estimated total wealth of $37.2 billion, higher than in countries such as Portugal and Monaco. And while Armitage may not reside here, that’s not necessarily a new phenomenon among the list of Irish billionaires.