Deal would create euro zone’s second-largest lender with €1.9 trillion in assets and over 140,000 employees 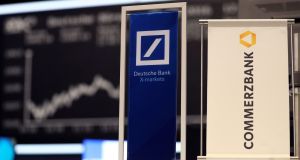 The senior management of Deutsche Bank and Commerzbank have begun exploratory merger talks on Sunday after the executive boards of Germany’s two largest listed lenders agreed to evaluate the benefits of a tie-up.

“We confirm that we are engaging in discussions with Commerzbank,” Deutsche Bank said at midday on Sunday in a regulatory statement, adding that “there is no certainty that any transaction will occur”.

Commerzbank informed investors that both lenders “have agreed today to start discussions with an open outcome on a potential merger”.

A person familiar with the process said talks would start immediately, while a detailed due diligence process would commence next week when the banks would set up a number of committees to explore specific questions.

Another person briefed on the matter said that the exploratory talks “won’t be over in a week” but that he expected protracted negotiations over a deal that would create the euro zone’s second-largest lender after BNP Paribas, with €1.9 trillion in joined assets and more than 140,000 employees.

In a note to employees published, Deutsche Bank chief executive Christian Sewing said: “we will only pursue options that make economic sense”. He also referred to experience showing that thare were “a lot of potential economic and technical factors that could hinder or prevent” a merger.

German service sector union Verdi, which opposes the deal, expects that in a worst-case scenario, up to 30,000 jobs would be cut. “I think that’s a realistic number,” a senior manager at one of the banks said, adding that he saw no outlook where unions would back the transaction.

The decision to start formal talks was taken by the boards on Sunday after the German government signalled over the weekend that it would support the restructuring needed to make a success of the tie-up.

According to a senior member of Germany’s government, Berlin’s priority is that the country’s largest banks address their chronic problems of bloated costs and measly returns on equity.

“A merger [of Deutsche Bank and Commerzbank] could be one of several options to do so,” this person said, adding that the government was not “pushing” the two banks into a deal.

Deutsche Bank had informed a large shareholder over the weekend about Sunday’s board meeting, a person close to one top-five investor said, adding that the shareholder was still not entirely convinced about the merits of a tie-up with Commerzbank but was willing to back a deal under the right circumstances. “This must be driven by compelling business arguments, not by political ones,” the person said.

Deutsche Bank chief executive Christian Sewing dropped his opposition to exploring a multibillion-euro merger with its smaller rival last month and asked the management board for a formal mandate to sound out options.

Commerzbank chief executive Martin Zielke saw the merger as one of the few realistic options for consolidation, as a cross-border deal with another European lender would face high regulatory and political hurdles, according to people briefed on his thoughts. However Mr Zielke would insist on several key preconditions before backing a merger.

Analysts at Frankfurt-based DZ Bank this week warned in a note to clients that a tie-up would come with manifold execution risks and deliver only mildly positive contributions to the enlarged entities’ profit after three years. They estimated that while annual costs would fall by €2.3 billion, a deal would trigger revenue losses of about €1.5 billion because of clients moving business to rivals to maintain diverse banking relationships.

DZ Bank estimated that a merger would lead to one-off costs of up to €8 billion, half of that linked to integration costs. The other half would be caused by a revaluation of Commerzbank assets, such as its €8.4 billion portfolio of Italian sovereign bonds, at market prices. DZ Bank envisaged two options to finance these costs: a capital increase or the sale of assets such as Deutsche Bank’s asset manager DWS.

People briefed on the matter said that German insurer Allianz was internally evaluating a potential purchase of DWS, should Deutsche Bank decide to hive it off.