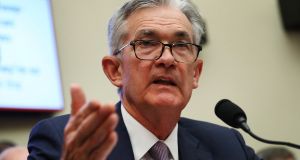 “Libra raises many serious concerns regarding privacy, money laundering, consumer protection and financial stability,” he said during testimony in front of the US House of Representatives Financial Services Committee. “These are concerns that should be thoroughly and publicly addressed before proceeding.”

The Fed and the US Treasury’s Financial Stability Oversight Council are looking at Libra, according to Mr Powell. Officials from the central bank met with Facebook a couple of months before it announced its Libra plans.

“The process of addressing these concerns should be a patient and careful one, and not a sprint to implementation,” he said.

He later added that Libra “cannot go forward without there being broad satisfaction with the way the company has addressed money laundering, all of those things”.

Facebook has drawn some scrutiny from lawmakers and government regulators over its vision for a new digital currency that would allow users to make instant international money transfers from their smartphones. The Libra Association has 27 initial partners, including Mastercard, Visa, Lyft and PayPal. However, banks have shown a reluctance to join the Libra project amid regulatory concerns and fears that it would compete with their own cryptocurrency efforts.

Last month, Mr Powell noted during a press conference that Facebook officials had discussed its Libra plans with the Fed, adding that there are potential benefits and risks with launching a digital currency that could attract widespread use.

Mr Powell told lawmakers on Wednesday that the central bank supports innovation in the financial services industry, “as long as the associated risks are appropriately identified and managed”. - Copyright The Financial Times Limited 2019

Stocktake: More hollow stock market boasts from Trump 05:10
Tick all the right boxes when it comes to your house insurance 05:06
Is there a middle ground on co-living schemes in Ireland? 05:05
Stocktake: Snowflake stock looks bubbly 05:00
Top law firm lobbies Government for defamation reform 05:00