Tin-eared bankers once more banging the drum about bonuses 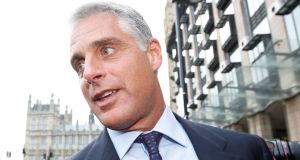 Remember the repentance of bankers after the financial crisis? It wasn’t quite the display of self-flagellation that some reformers would have liked. The Occupy Wall Street movement did not provoke the overthrow of capitalism.

But there was a degree of moderation. In London, where bonuses remained a key part of the mix, banks urged their staff not to flaunt their bonuses by dashing out and buying Ferraris. As banks’ profitability fell, banker pay dipped a little too. And in the EU, new rules prevented bonuses from exceeding two times basic pay. In Ireland, of course, they were even more dramatically targeted.

But if last week’s news is any guide, it is no longer shameful to fight for the right to high pay. Lawsuits brought by Credit Suisse and former UBS investment banking chief Andrea Orcel are clear evidence that defiance over bankers’ bonuses is returning.

First, consider Orcel’s €100 million case against Banco Santander, brought on the grounds of alleged breach of contract after the Spanish bank rescinded its offer to make him chief executive.

Orcel had already resigned from UBS to take the job on the understanding that he would be compensated for the value of his deferred pay tied up with the Swiss bank. But between the initial job offer last autumn and early 2019, the Santander board baulked at the cost of covering his buyout – worth an estimated €50 million. The additional €50 million in the claim apparently relates to lost potential earnings and projected costs including legal fees.

It was clearly a horrible position for Orcel – or anyone else for that matter – to find himself in: resigning from one role to find the dream job you thought you were moving to no longer exists. He can take some comfort that the money he has lost out on pales in comparison with the decline in UBS’s market value, down by nearly €10 billion since his departure.

The case itself will rest on the legal point of whether Orcel had a contractual entitlement to the money and whether the contract was breached. And contracts should of course be honoured.

But the law is only part of the story here. Weighing the ethics of the case throws up far bigger questions. Can and should society accept a value of €100 million being put on an individual – especially a banker? Is Orcel living in a parallel universe?

After all, the 2008 crisis – triggered in part by greedy financiers – led pretty clearly – via economic meltdown, monetary policy and government austerity – to a widening of the gap between the haves and have-nots.

Orcel himself was a key adviser on the takeover of ABN Amro, which triggered the collapse of RBS and its record £46 billion bailout.

The rise of hate-preaching populist politicians – from Donald Trump in the US to the far-right across Europe – can at least in part be traced back to the mayhem caused by the financial crash.

The other case that hit the headlines this week involved Credit Suisse taking HM Revenue & Customs in Britain to court in an attempt to reclaim £239 million of tax paid in 2010 in relation to a post-crisis bankers’ bonus tax imposed for a period of four months by then-chancellor Alistair Darling.

Because some other banks chose not to pay bonuses during that period, Credit Suisse is claiming discrimination.

John McDonnell, Darling’s successor as Labour finance chief, said last month: “This is outrageous and Credit Suisse should pay these taxes. People in this country want the rich to shoulder their fair share of responsibilities.”

McDonnell may be dismissed by some as a hard-left politician. But on this he has a powerful point.

There is a pretty direct connection between the £239 million that Credit Suisse paid the Exchequer and the ability of government – in the particularly straitened times of 2010 – to fund the UK’s hospitals and schools. The bank would argue that, unlike many rivals, it did not need government bailout money in the crisis and that it pays plenty of tax, including 1.4 billion Swiss francs of income tax last year.

But, like Orcel, it is evident that Credit Suisse has a tin ear. Both have deemed the reputational pummelling they will get from bringing these cases to be worth it in the name of legal justice.

The broader danger is that the public profile attracted by such legal fights further tarnishes the unloved but vital banking sector – and magnifies the them-and-us feeling across society, with still untold ramifications for our world.