UK Treasury to start privatising RBS by next March 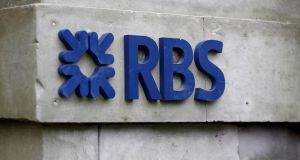 RBS is in the midst of settling a multi-billion dollar fine with US authorities for mis-selling mortgage securities. Photograph: Bloomberg

The UK chancellor has for the first time put a deadline on when the government will start selling its £24 billion (€27 billion) stake in Royal Bank of Scotland, owner of Ulster Bank, promising to kick off the privatisation process by March 2019.

The plan to start selling the government’s 71 per cent stake in RBS in the next 16 months comes a few weeks after the bank said it was confident of settling a multi-billion dollar fine with US authorities for mis-selling mortgage securities this financial year.

Philip Hammond, the chancellor, has previously said he will not begin the sell-off of RBS shares until the bank has agreed the size of an expected fine with the US Department of Justice, which some analysts estimate could be as high as $12 billion (€10 billion).

The UK Treasury said in Wednesday’s Budget that it “intends to recommence the privatisation of RBS before the end of 2018/19 and to carry out over the forecast period a programme of sales expected to dispose of around £15 billion worth of shares, which represents around two thirds of our stake at current market prices”.

Ross McEwan, RBS chief executive, said last month “we remain optimistic of reaching a final settlement this financial year,” noting that only a couple of banks remain in the queue to settle ahead of RBS. He added: “There have been discussions at the lower levels...no substantial conversations beyond that.”