Anne Boden to bring Starling Bank, which she founded in UK, to Ireland 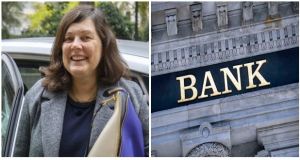 Anne Boden: "It’s hard to start a new bank but it’s easier than fixing the old."

A former chief operating officer with AIB has said she left the Irish banking sector because it was easier to set up a new bank in the UK than to “fix a broken system”.

Anne Boden, who was a senior member of AIB’s management team between 2012 and 2013, left the sector afterwards to set up Starling Bank, a UK fintech start-up that launched in the UK in 2014.

Prior to her time with AIB, Ms Boden was head of Europe, the Middle East and Africa global transaction banking with RBS.

In terms of the culture in the Irish banking sector, she said that customers were now demanding more from banks.

“All over the world, there has been a huge move to be far more customer-centric,” she said. “The banking crisis was very, very tough, and it was particularly tough in Ireland. I think consumers and the public generally want better and more from their banks.

“I came to the conclusion that it was easier to start from scratch than fix a broken system. The easiest way to do that was to start a new bank with a new culture, new technology, and a different way of doing things. It’s hard to start a new bank but it’s easier than fixing the old.”

Following the economic crash and more recent scandals, Ms Boden said the culture and reputation of Irish banks will be an issue for “a long time”.

“I think the crisis is now quite a long time ago, and the majority of people working in the fintech sector were still in university when the crisis happened,” she said.

“I think, in our eyes, the reputation of the Irish banks will be an issue for a long time,” she said. “But for the majority of people who are now part of the fintech world, it is a long time in the past.”

Ms Boden said Starling Bank would target the Irish market with its new low-cost digital current account in a move that will bring further competition to the consumer banking space. There will also be a small number of jobs created.

“The vision was to create a bank that does current account banking very very well, based on all-new technology, and having direct access into payment schemes,” she said.

“We always had the intention of being European, and we will be launching our European account early next year. We’ve got a few people already trialling it in Ireland. We will be marketing it in Ireland probably about the middle of next year.

Mortgages and other banking products could also be on offer for Irish customers down the line.

1 Who are Ireland’s 17 billionaires?
2 My father in a nursing home wants to gift me his house
3 State subsidises public sector retirees to cover gap until State pension
4 Are there annual limits on inheritances or gifts to a child?
5 Swiss police suspect Davos plumbers of being Russian spies
6 Corporate tax change is inevitable, says Donohoe
7 Q&A: Why has the pension age question suddenly become an election issue?
8 Property firm sues engineering company over waterproofing of basement
9 Insolvency arrangement approved for man with €60 million in debts
10 Countries that fail to attract immigrants will lose out – Microsoft chief
Real news has value SUBSCRIBE