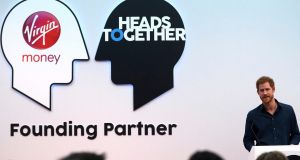 Prince Harry gives a speech at the Virgin Money headquarters in Newcastle during the ‘Heads Together’ charity day. Photograph: Scott Heppell/PA Wire.

The head of British bank Virgin Money said on Tuesday it would look at buying assets from Co-operative Bank, which is up for sale, after Virgin Money’s reported operating profit rose by a third last year.

Rescued from the brink of collapse by a group of hedge funds in 2013, Co-op bank is seeking a buyer after struggling to meet regulatory capital requirements. Its purchase would add four million customers to any bank’s books.

“The bank has not approached anybody in Co-Op Bank yet . . . but at some point we will look at this strategic opportunity,” Virgin Money chief executive Jayne-Anne Gadhia told Reuters.

She did not specify whether Virgin Money would want to buy the whole business or seek to cherry-pick certain assets.

Virgin Money on Tuesday highlighted resilient demand from borrowers following Britain’s vote to leave the European Union, and Gadhia said the bank had not tightened any lending criteria.

Gross mortgage lending rose 12 per cent to £8.4 billion (€9.5bn) in the year, giving the so-called challenger bank a 3.4 per cent share of a UK mortgage market dominated by larger players.

However, the lender’s impairment charges increased to £37.6 million from £30.3 million, with most of the rise coming in its credit card business, which the firm attributed to a jump in its credit card lending by 55 per cent to £2.4 billion.

The bank, which listed on London’s main market in 2014, said it was sufficiently nimble to adjust to changes in the operating environment as the timing and nature of Britain’s exit from the EU remains unclear.

However, Gadhia said that the bank was committed to maintaining its existing branch network.