London Briefing: ‘We’re not counting the complaints any more, we’re weighing them’ 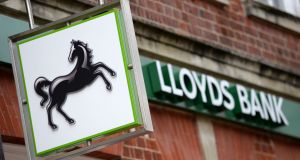 Lloyds was hit by up to 800,000 requests for information a week in the final month for claims. Photograph: Andrew Matthews/PA

António Horta-Osório stunned the City eight years ago when he broke ranks with rival banks and decided Lloyds would settle claims for mis-sold payment protection insurance (PPI). It was a dramatic capitulation. Until then, Lloyds and the rest of the banking industry had been fighting the City regulator in the courts, claiming they had no case to answer.

But, as he enraged his peers by setting aside what was regarded at the time as a massive sum – £3.2 billion (€3.58bn) – to cover Lloyds’ liability, Horta-Osório insisted it was “the right thing to do”. Had he known then that the bill for the banking industry would ultimately spiral to more than £50 billion – and £22 billion for his bank alone – would the Lloyds boss still have been so keen to do the right thing?

One suspects not. Bankers are not generally known for their altruism and the financial services industry has repeatedly demonstrated a willingness to fleece customers if it can get away with it.

Concerns over PPI, which was supposed to protect customers if they fell ill or lost their jobs, first surfaced more than two decades ago. But the unprecedented scale of what has become by far the UK’s biggest mis-selling scandal has not lost its power to shock.

A flood of last-minute claims was widely expected before an August 29th deadline, but the scale of the rush has been little short of astonishing. Lloyds, for example, was hit by up to 800,000 requests for information a week in the final month for claims, compared with 70,000 a week at the start of the year.

Many of those enquiries will not end in a payout but the success rate is expected to be high enough to have caused the bank on Monday to raise its PPI liability by between £1.2 billion and £1.8 billion.

At Barclays, which was also caught out by the rush, another £1.2 billion to £1.6 billion is now being put aside. As one banker observed, “We’re not counting the complaints any more, we’re weighing them.”

Lloyds was the biggest culprit in foisting the highly profitable but virtually worthless insurance on its customers and so has the biggest bill. The latest hole it has blown in the group’s finances has forced Horta-Osório to suspend the bank’s share buyback scheme and there’s also a fear that dividends could be affected.

While the PPI bill is unlikely to climb much higher now the deadline has passed, thousands of bank staff will continue to sift through the claims for the rest of this year and beyond.

And although the PPI scandal is – gradually – coming to end, this will not be the last of it for the banks, which remain on the hook on a number of fronts where customers have been treated badly and could be due compensation.

The claims management companies, which have made billions out of the PPI scandal, have already moved on to what they hope will be the next big money-spinner in the “where there’s blame, there’s a claim” world. Top of their lists are packaged bank accounts, which charge a monthly fee in return for “free” extras such as travel insurance or breakdown cover.

It won’t be as lucrative as PPI, but if there’s compensation to be had, the claims firms will pursue it.

Another shiny bauble appears to have caught the eye of Mike Ashley, as the Sports Direct boss continues to pursue his perplexing acquisition spree. The latest target is Links of London, the troubled jewellery chain which is owned by the even more troubled Greek company, Folli Follie.

Ashley’s Sports Direct is understood to be one of two bidders vying for Links, the other being retail restructuring specialist Hilco, which owns Homebase.

At first glance, there’s no apparent logic to Links joining the Sports Direct retail stable. Nor does a second or third glance reveal any grand plan – but then it’s been hard to detect any synergy in Sports Direct’s purchases of Jack Wills, Evans Cycles and sofa.com.

The City managed to persuade itself there was some logic to the House of Fraser acquisition and the pursuit of Debenhams, but we all know how that has turned out.

Some light may be thrown on Ashley’s strategy, or even the name of a new auditor, at the Sports Direct annual meeting Wednesday, although probably not. Once again, he’s decided to bar press from the proceedings.

1 Copper Face Jacks pays out €45.95m in dividends to owner
2 Ireland’s economy set to shrink 8.5% due to pandemic
3 EU guidance undermines Irish banks’ insistence on charging interest on mortgages
4 Columbia opens first Irish store on Trinity Street in Dublin city centre
5 Will family’s tax debt stop me getting my inheritance?
6 What is Covid Tracker Ireland?
7 Mortgage arrears: Prevention is definitely better than cure
8 Why gift a son now if it eats into his tax-free inheritance threshold?
9 High Court refuses Denis O’Brien application for discovery of documents
10 How much does it cost to sell your house?
Real news has value SUBSCRIBE