Homebuilder lists in Dublin and concludes €107.5m purchase of land at RTÉ’s complex 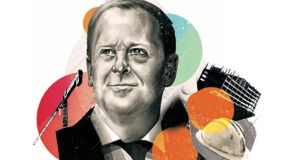 Cairn Homes chief executive Michael Stanley is the recipient for July of The Irish Times Business Person of the Month Award; in association with KPMG.

Cairn Homes chief executive Michael Stanley is the recipient for July of The Irish Times Business Person of the Month Award, in association with KPMG.

Just over two years after Cairn Homes became the first Irish homebuilder to float on the stock market – albeit the London Stock Exchange – the company had made sufficient progress for the Irish Stock Exchange to admit it to its main market in July, without the normal requirement to have at least a three-year financial record for admittance.

The company also concluded the €107.5 million purchase in July of 8.64 acres of land at broadcaster RTÉ’s complex in Dublin, on which it plans to build 500 apartments and 10 houses. The company sold almost €52 million of new shares to partly fund the deal, bringing to more than €720 million the amount of equity it has raised in a little over two years, including its €440 million initial public offering.

The programme entitles the trio to 20 per cent of total shareholder returns over seven years after the IPO, subject to the share price achieving a 12.5 per cent compound annual growth rate of return.

The plan was used during the flotation to give the directors some upside for committing assets and investment to the company at the time of the transaction, rather than taking money off the table in June 2015.