Business People of the Month: Dan and Linda Kiely 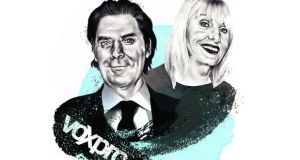 Dan and Linda Kiely, the founders of Cork-based business process outsourcing firm Voxpro, have been named the recipients of The Irish Times Business People of the Month Award, in association with KPMG.

The Kielys take the award for the month of August after selling the company they established more than two decades ago to Canadian outsourcing giant Telus International.

Industry insiders estimate the deal is worth close to €150 million resulting in a bumper pay day for the founders who largely self-financed the business.

Not bad for a firm which started out with six people working above a pub on Marlboro Street in Cork city in 2002.

The company recorded a 78 per cent rise in turnover to €33.4 million in 2015. Earnings before interest, taxes, depreciation, and amortisation (Ebitda) jumped 168 per cent to €3 million from €1.1 million a year earlier.

As part of Telus, Voxpro is predicted to go from strength to strength and it is likely we’ll be hearing plenty more from the Kielys in the coming years.