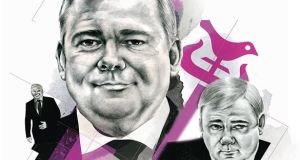 Bernard Byrne was appointed chief executive of AIB in May 2015.

AIB chief executive Bernard Byrne is the recipient for June of The Irish Times Business Person of the Month Award, in association with KPMG.

After months of careful preparation and planning, by both the Government and the bank, AIB returned to the main stock markets in Dublin and London following a six-and-a half year hiatus.

The share sale involved Mr Byrne and other senior executives in AIB travelling the world to explain the bank’s investment story.

The success of the initial public offering resulted in a cheque for €3.4 billion for the State, which was able to reduce its holding to 71 per cent. It was the biggest flotation in Europe so far this year, and the second-largest in the world. The shares have since risen by 15 per cent.

Mr Byrne has been instrumental in the turnaround of AIB over the past six years. An accountant by training, he joined AIB in 2010 as group chief financial officer before later leading the bank’s retail, business and corporate segments. Mr Byrne was appointed chief executive in May 2015.