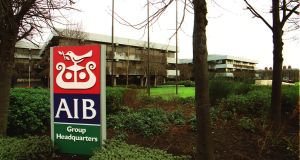 The syndicate of investment banks and brokers who have been appointed by the Government to advise it on a possible flotation of AIB shares are expected to be paid between €10 million and €13 million, the Department of Finance has said.

These fees will be recouped from AIB in the event that the initial public offering (IPO) of shares goes ahead. This means that taxpayers, who own 99.9 per cent of the bank, will not foot the bill for these fees.

The financial advisers are also operating on a “no foal, no fee” basis, which means they will receive no payment in the event that the flotation does not happen.

In a statement issued to The Irish Times, the department said: “Any fees payable to the syndicate of investment banks and brokers, who will sell the shares, are based on a percentage of the value of any shares sold. Such fees are only incurred in the event of a transaction occurring. Importantly, all fees are recoupable from AIB.”

The department said it was not possible to quantify the exact level of fees that would be paid to the consortium at this stage as no transaction had taken place. However, it indicated that it would range from €10 million to €13 million.

Separately, fees will be payable to a raft of other legal, accounting and public relations advisors. Again, these will be recouped from AIB in the event of a transaction proceeding.

On Thursday, the department appointed an additional six financial groups to advise on a possible IPO of AIB.

Citigroup Global Markets, Goldman Sachs International, Goodbody Stockbrokers, JP Morgan and UBS were chosen as bookrunners, while Investec Bank was selected co-lead manager. They will all assist with the marketing and sale of shares in AIB.

In December the department appointed Bank of America Merrill Lynch, Davy and Deutsche Bank as joint global co-ordinators and bookrunners for the IPO, while Rothschild had previously been selected as an independent financial adviser for the project.