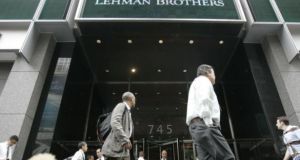 They were called public enemies. They were strung up in effigy during protests in London and New York. Their behaviour spurred an outcry that changed the politics of the West.

Bankers on both sides of the Atlantic were blasted for the sins that triggered the financial crash of 2008 and the recession and scandals that followed. It seemed like the vitriol would never stop. Until now.

Practitioners of what George Soros called the “alchemy of finance” appear to be out of the dock. US president Donald Trump has surrounded himself with at least five former Goldman Sachs Group bankers and pledged to unshackle the industry. In France, there’s a good chance Emmanuel Macron, a former investment banker, will be elected president. And across Europe, leaders are vying to lure banks as Britain prepares to quit the European Union.

Attitudes are shifting as time passes and fresh concerns move to the fore, said Rita Kottasz, the co-author of two recent studies on consumer perceptions of the UK financial industry.

“Rather than being angry with bankers, people are focusing more generally on the divide in wealth,” said Ms Kottasz, a senior lecturer in international business strategy and marketing at Kingston University in London. “So many things have happened on that front -Brexit, the discussion of globalisation, immigration, and nationalism. Those things are now of much more concern to individuals than the banks.”

As bank-bashing subsides - nine years after the collapse of Lehman Brothers - there may be a push to slow down or unwind rules designed to curb the financial world’s excesses.

Even the French, who so distrust the profit motive they practice what economist Thomas Piketty calls “capitalism without capitalists,” are coming around. Back when Francois Hollande was running for president in 2012, the Socialist leader described the financial industry as his “true adversary.” By contrast, Mr Macron, a former economy minister under Mr Hollande, has owned his tenure at Rothschild, a 200-year-old investment house.

“I’ve spent four years of my professional life there, of which I am very proud,” he said at a campaign stop this month. “I’ve learned a lot from it. It spares me from talking nonsense like others do on the economy and world order, and my country’s rules of business.”

Polls show Mr Macron (39) running neck-and-neck with right-wing nationalist candidate Marine Le Pen in the first round of voting in April, and winning a May runoff.

Make no mistake, the anger unleashed by the subprime mortgage crack-up and more than $1 trillion in bank bailouts still simmers. In a 2016 Survey Monkey poll that asked 10,000 Americans to list the companies most damaging for the nation, three of the top five were banks. Not all of Mr Trump’s supporters want Wall Street to get a free pass.

“People have not forgotten what happened in 2008 and we will hold bankers’ feet to the fire,” said Janet Tavakoli, a Trump backer and president of Chicago-based Tavakoli Structured Finance.

A more permissive attitude toward Wall Street may pave the way for rolling back safeguards, said Phil Angelides, the chairman of the Financial Crisis Inquiry Commission, a bipartisan body that probed the causes of the crash.

In addition to the Dodd-Frank Act, which overhauled regulation, Mr Trump and his allies in Congress are taking aim at the Consumer Financial Protection Bureau, the six-year-old agency that fined Wells Fargo $185 million last year for fabricating millions of phony accounts to meet sales goals.

“This is dangerous,” said Mr Angelides, a Democrat and the former treasurer of California. “Taking down the bulwarks of public protection will expose communities and the economy to another financial disaster. It may not be this year or next, but eventually we’ll pay a very dear price for this.”

In Europe, ever since Britain voted to quit the EU last June, officials from Germany to Ireland have set out to attract bankers leaving the City of London. Perhaps no nation has done as sharp a U-turn as France. After his election in 2012, Mr Hollande drove away wealthy residents by imposing a short-lived 75 percent income tax on the highest earners. Now, he’s pledging to cut the corporate rate and to offer tax benefits for workers moved to France.

In the UK, prime minister Theresa May has been careful to convey that she won’t give banks, which strongly supported Britain remaining in the EU, special treatment as the country separates from the EU over the next two years. Yet behind the scenes, after threats from the industry to move jobs and operations abroad, Ms May has more recently sought to reassure financial-services chieftains that she’s aware of the importance of an industry that accounts for about 12 per cent of UK economic output.

Earlier this month, she spoke at a celebration commemorating Morgan Stanley’s 40th anniversary in the City. Surrounded by ancient treasures in the British Museum, the prime minister told the assembled guests that she would do everything possible to protect London’s role as the world’s preeminent hub for financial services, according to people present at the event.

Chastened by some $321 billion in penalties for various misdeeds, the financial-services industry has been forced to change its practices and become more accountable. Even as big banks come out of the cold, the question will be whether they’ve learned their lesson.

“They talk the talk,” said Peter Richardson, the London-based managing director of financial services at Protiviti, a consulting firm. “In some organisations we have not seen them tackle the basic underlying assumptions that drive them to do what they do when your back is turned. I fear that may cause problems in the future.”