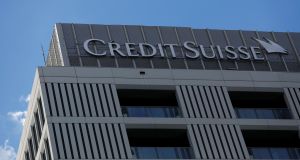 Executive pay is a hot-button issue in Switzerland, with voters backing a “fat cat” referendum in 2013 giving shareholders a binding vote on pay.

Mr Thiam’s pay packet followed a near-3 billion franc (€2.8 billion) loss at Credit Suisse in 2016 amid a major restructuring and penalties for the sale of toxic mortgage debt in the run-up to the financial crisis.

“Overall, the board considered Mr Thiam’s strong leadership, consistent execution of the group’s communicated strategy, effective delivery of cost efficiencies, principled and ethical conduct, and his role in driving the group towards a stronger capital position in determining that Mr Thiam had met his performance targets set for the year,” the bank said in its annual report on Friday.

Thiam, a former Ivorian government minister who is reshaping the bank by boosting wealth management and scaling back investment banking, earned 4.57 million francs (€4.26 million) in 2015 after joining Credit Suisse from British insurer Prudential at mid-year. He had requested a 40 per cent bonus cut that year.