Damage claims may be lower than those for Storm Darwin in 2014, says industry body 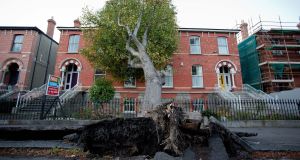 Damage caused by Storm Ophelia on Monday is expected to result in a lesser cost for Ireland’s insurance industry than Storm Darwin, which struck the country 3½ years ago, according to sources close to two large insurance companies, based on preliminary assessments.

Storm Darwin triggered €111 million in successful insurance claims, according to industry representative body Insurance Ireland, making it the fifth most costly weather event suffered by the sector in the past decade.

While one of the sources estimated that Ophelia will lead to a “high number” of claims, the overall cost to the industry is unlikely to be higher than Darwin. The other source said that “all the indications are that it will be well less than Darwin in 2014”.

The estimates do not take into account the possible impact of Storm Brian, which is on its way to Ireland this weekend, or heavy rain in parts the country on Thursday as the clean-up continues after Ophelia. Three people were killed and hundreds of thousands of homes and businesses were knocked off the electricity grid as a result of Monday’s storm.

Insurance Ireland’s chief executive Kevin Thompson said earlier this week that it was too early to say whether insurance premiums would rise after claims are made on the back of Monday’s storm. It is understood that the industry body will not begin aggregating estimates from individual insurers until after this weekend.

Shares in FBD Holdings, Ireland’s only listed indigenous general insurer, slid as much as 4.4 per cent on Monday as investors fretted about the cost of Ophelia to the industry. However, the stock advanced 2.5 per cent on Thursday to €8.10, bringing it within 5 cent of where it was changing hands the previous Wednesday before investors started pricing in the storm’s impact.

Since the beginning of the century, only one event – freezing conditions across the country in January 2010 – led to claims of close to €300 million for the Irish insurance industry. Flooding in November 2009 was the second most-costly episode, costing insurers €244 million.

Insurers in Ireland have paid out over €1.1 billion to policyholders over the past decade for claims stemming from severe weather events, including storms and flooding.