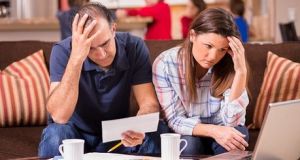 Niall Kiernan of Lawlor Partners says he has “dozens” of aggrieved customers who are not satisfied with the level of redress and compensation on offer to them as a result of the ongoing tracker mortgage investigation. File photograph: Getty Images

A Dublin based lawyer is hoping to bring a test case to the High Court in the first half of next year, seeking compensation for those affected by the tracker mortgage scandal.

Niall Kiernan of Lawlor Partners says he has “dozens” of aggrieved customers, mostly of Permanent TSB but latterly of other banks, who are not satisfied with the level of redress and compensation on offer to them as a result of the ongoing tracker mortgage investigation.

Mr Kiernan says a test case is the “most prudent” way to proceed, to see the court’s attitude and to see whether the bank is willing to settle or fight the case.

2) Paying any money that is owed, and;

However, Mr Kiernan asserts that compensation on offer is not adequate, and should be addressed on a case-by-case basis. The High Court deals with claims in excess of €75,000.

“When a contract is breached, it affects different people in different ways. Everyone’s loss is subjective to themselves,” he said, noting that being overcharged €40,000 would have a different impact on different people, depending on their financial circumstances.

“I have clients who would have had a third child and didn’t, or upgraded their house, or couldn’t afford to send their kids to private school, or to go on family holidays or buy a new car,” he said.

Customers who have already accepted compensation and redress are not precluded from a taking a further case against a bank, Mr Kiernan said.

Moreover, while banks may be reinstating tracker rates, Mr Kiernan argues that these are not always at the appropriate rate.

In the case of Permanent TSB, for example, some of its affected accounts had the term “applicable rate” on the contract, rather than a stated exact margin over the ECB rate. On that basis, the bank says it has some flexibility when it comes to reinstating tracker rates.

However, Mr Kiernan argues that, while a stated interest rate may not have been in the original document, amortisation tables in the documents correspond to lower interest rates than the bank is now offering customers, and customers would have “relied on these figures at the time” in making their decisions.

To date, some 20,000 cases of tracker customers being mistreated have come to light (7,100 before the Central Bank’s current examination, and a further 13,000 as part of it). There are expectations that the final number may reach as high as 30,000.

Mr Kiernan is not the only lawyer considering litigation. A number of other firms, including Coleman Legal and McHale Muldoon, are also looking to attract clients to go down the legal route.