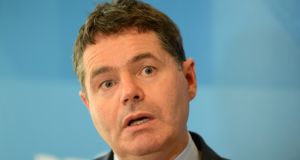 Tech start-ups and other small businesses will be able to offer key personnel tax-efficient stock options under a new Government scheme designed to help firms attract and hold on to talented staff.

Details of the Government’s Key Employee Engagement Programme (Keep) were contained in this year’s Finance Bill published on Thursday by Minister for Finance Paschal Donohoe.

Employees are currently liable to income tax, USC and PRSI when exercising their share options.

However, under the Government’s new scheme, they will now only be liable for capital gains tax at a rate of 33 per cent upon the sale of their shares, effectively allowing them pay the tax bill out of the proceeds.

“The measure will make available an important instrument to our SME sector to allow them to attract and retain the best available talent in order to develop and grow their businesses and maintain competitiveness, particularly at this time of challenge as they prepare for the post-Brexit scenario,” the Department of Finance said.

Small and medium-sized enterprises (SMEs) have been lobbying the Government hard to change the laws around employee share options, claiming the tax liability was out-of-kilter with competitor countries.

The Bill also provides more details about the Government’s move to increase the rate of stamp duty on commercial property transactions from 2 to 6 per cent.

The old rate will apply to all transactions for non-residential properties signed prior to budget day on October 12th last.

Commercial property groups have warned the Government will struggle to achieve its projected €376 million yield on the new 6 per cent rate as it is based on last year’s transaction volume, which is unlikely to be repeated.

As expected, the bill also included an extension of stamp duty relief on commercial transactions for farmers.

Following criticism from the farming industry, the Minister decided to exclude inter-family sales and transactions where the buyer is under 35 years of age from the new rate.

The Finance Bill, which gives legal effect to the various taxation measures announced in the budget, provides for the increase in the excise duty on cigarettes by 50 cent as well as the introduction of a tax on sugar-sweetened drinks.

The bill also contains details of the tapered extension to the mortgage interest relief as well as the proposed hike in the vacant site tax to 7 per cent.