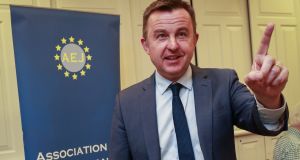 BPFI CEO Brian Hayes: His plea for bankers to be able to speak their minds on major issues affecting their sector, and the economy at large, might get a better hearing if bankers weren’t so reluctant to apologise for their mistakes. Photograph: Crispin Rodwell for the Irish Times

Free speech is the cornerstone of every democracy so bravo to Brian Hayes for saying that bankers here should not be put on the “bold step” for expressing views on regulatory or economic policy if Irish society is to avoid repeating mistakes of the past by drowning out contrarian voices.

The former Fine Gael politician and ex-junior minister at the Department of Finance is now chief executive of the Banking & Payments Federation Ireland (BPFI), making him the industry’s lead spokesman.

His comments to The Irish Times on Monday were a reference to remarks made earlier this month by deputy Central Bank governor Ed Sibley, when he suggested that bankers’ calls for a relaxation of mortgage lending rules introduced in 2015 were “echoes” of pre-crisis hubris.

As noted by my colleague Joe Brennan in his report, Sibley’s comments were seen as a veiled reference to AIB chief executive Colin Hunt’s remarks in September that the time has come to loosen the mortgage rules.

Hayes spoke up on many issues during a distinguished 25-year political career as a member of Dáil Éireann and the European Parliament.

In a hard-hitting speech to BPFI’s 2014 conference, Hayes, then a newly-elected MEP, said Irish mortgage customers were being “fleeced” by our banks. The following year, he called for the Competition and Consumer Protection Commission to investigate mortgage rates in Ireland, and separately said a “special bank levy” should be introduced to provide additional relief through the tax system for variable rate mortgage holders.

In October 2016, Hayes said Irish consumers were still “paying over the odds” for their variable rate mortgages. “Moreover, it’s not only mortgages where consumers are getting ripped off. Irish banks are offering much poorer returns on deposits than their euro zone counterparts,” he added.

A year later, he submitted a formal complaint to the European Commission’s Directorate-General for Competition urging it to initiate an investigation into the potential cartel activities of Irish banks.

In November 2017, he encouraged whistleblowers from within the banking sector to come forward to give hard evidence about the tracker mortgage scandal.

Without fear or favour, Hayes shone a harsh light on Irish banks and their many failings over the years, and there were quite a few raised eyebrows here when it was announced that he was to become the BPFI’s new chief.

Hayes’ plea for bankers to be able to speak their minds on major issues affecting their sector, and the economy at large, might get a better hearing were it not for the fact that bankers here seem unable to say sorry for their mistakes. At least not until it is dragged out of them.

We all remember the Anglo Tapes, and the total contempt that officials of that failed institution had for the rule of law, the institutions that regulated them and taxpayers who ended up losing about €30 billion on its bailout.

Or Eugene Sheehy’s arrogant comments as AIB chief executive at the height of the crisis that he would “rather die than raise equity”, which it later did from the State to the tune of €21 billion.

More recently, we have the tracker scandal, which has cost the banks €1 billion to date and impacted about 40,100 customers’ accounts. Some 99 families lost their homes as a result of being denied a tracker by their lender.

In the early days of the Central Bank’s examination, banks simply didn’t get the outrage that was being directed at them by the public and politicians. To them, it was a legacy issue from the pre-crash era and a numbers exercise that had to be endured.

Apologies had to be dragged out of them for the scandalous way in which they treated their mortgage customers post the crash.

Permanent TSB was the first in the stocks, initially admitting publicly to failings in 2015, just before the Central Bank launched its industry-wide examination. For PTSB, that concluded in May with the regulator hitting the bank with a record €21 million fine for 42 regulatory breaches in its treatment of mortgage customers.

PTSB initially fought tooth and nail against customer complaints on the tracker mortgage issue. It took an enforcement investigation by the Central Bank to give the bank pause for thought on the matter. It wasn’t when the Financial Services Ombudsman found against the bank following complaints from a number of account holders, or when the High Court upheld the FSO’s ruling in August 2012.

In fact, the bank pressed on with a Supreme Court appeal against four customers who held two mortgages between them. It was only dropped in February 2015 under pressure from the regulator.

Last week, we had a contender for Gaffe of the Year when KBC group chief executive Johan Thijs made ill-judged comments about the tracker scandal. “What is still an annoying thing is all the tracker mortgage stuff and, honestly, we would recommend to Central Bank of Ireland: come on, guys, turn the page,” he said as Belgian bank KBC reported quarterly earnings. “We’re focused on doing business, we’ve learned our lessons, we know what to do.”

In a signal that his usually sharp political antennae have been dulled by hanging around with bankers, Hayes initially characterised Thijs’s comments as “unfortunate”.

On Monday, he concluded that it was “a bad week and a bad mistake”, adding that Thijs’s subsequent apology for his remarks was the right thing to do.

Hayes was right about one thing: there is still huge sensitivity around the banks in Ireland because of the scandals, and they have a mountain to climb in terms of reputation and lost trust. There isn’t a bold step big enough to accommodate all the bankers who have failed us in the past decade or so.