Return of bankers’ bonuses a difficult sell for Government 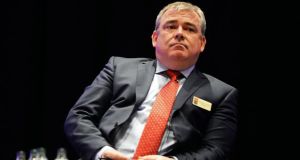 Banker bonuses were one of the root causes of the financial crash. A vast system of incentives that rewarded risk-taking can be directly linked to the excessive lending practices of banks here and elsewhere in the lead up to 2008. Politically the issue is toxic.

Nonetheless these bailed-out banks, the ones that drove the Irish economy so deeply into debt – and more recently sullied their already tarnished reputations in the tracker mortgage scandal – are pushing hard to have the pay restrictions imposed on them after the crash lifted.

They claim their businesses are being fleeced of high-calibre personnel because they are restricted from paying market rates, which leaves them at a competitive disadvantage with foreign rivals.

But removing the shackles after 10 years of bailouts and controversies is going to be one difficult sell for the current minority Government.

The surprise resignation of AIB’s chief executive, Bernard Byrne, to pursue presumably a more lucrative opportunity with Davy’s capital markets division, coming in the wake of chief financial officer Mark Bourke’s similarly-motivated exit, has sent the Department of Finance into a tailspin.

It follows on from AIB chairman Richard Pym’s pointed suggestion that pay restrictions for bailed-out banks here had turned AIB into a “training ground” for bankers who then move to higher-paid roles with competitors.

But just how competitive is the Irish banking sector? Other than KBC, it’s still basically a duopoly – AIB and Bank of Ireland with Permanent TSB trailing a distant third – even though banks here charge variable mortgage holders double the going rate in Europe.

Currently, salaries in the three bailed-out banks are capped at €500,000, while bonuses are subject to an effective tax rate of 89 per cent. Some see it as a war reparation for past misdeeds; others a politically-motivated restriction that ultimately restricts banks from competing at the expense of shareholders, in this case the taxpayer.

But critics make the point that the half a million salary cap is not a massive handicap for banks that have limited business interests outside of Ireland and that operate solely on a national basis in a small economy.“There is an issue around retention, but it’s not at executive level,” one source said. “The market has got competitive but not between covered institutions, it’s more in the general financial services sector – and it’s more likely that private asset management and payment firms are poaching middle-ranking banking staff,” he said.

Minister for Finance Paschal Donohoe has commissioned an independent review of banking remuneration here, which is expected to recommend a return of bonuses, presumably to put himself at one remove from such a politically divisive issue.

At the current juncture, with the Government relying on Fianna Fáil for support, restoring public confidence in the banking system is still likely to win out against the demand to lift pay caps, however.