State was told withholding €270m would not stand a constitutional challenge 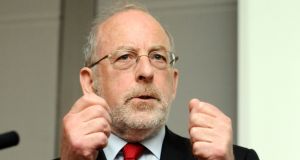 Patrick Honohan: The then Central Bank governor told Department of Finance officials in 2015 there was a “moral case” to find a way to prevent Anglo junior bondholders recovering anything.

The Attorney General’s Office warned the Government it could not prevent a likely repayment of almost €270 million owed to a group of junior bondholders in the failed lender Anglo Irish Bank.

The liquidators of Irish Bank Resolution Corporation (IBRC), the successor entity to Anglo and Irish Nationwide Building Society, said on Tuesday that they are set to repay in the coming weeks the remaining 50 per cent of claims from the group’s senior unsecured creditors, led by the State, which is owed €1.2 billion.

The liquidators, Kieran Wallace and Eamonn Richardson of KPMG, also revealed junior bondholders who refused to take part in an exercise in 2010 to share Anglo’s losses are now likely to recover the €270 million they are owed, despite assurances in 2015 by the then taoiseach, Enda Kenny, in 2015 that he saw no circumstances under which they would be made whole.

“The Department of Finance engaged with the Attorney General’s Office (AGO) for formal advice and to explore what options, if any, would be open to us avoiding the repayment of this subordinated debt,” a spokesman for the department said on Tuesday.

The IBRC liquidators will start to adjudicate on junior bondholders’ claims from January 2019, though it is not yet clear when they can expect to start to recover their money.

Sinn Féin’s finance spokesman Pearse Doherty said that the planned junior bondholder repayments amount to “a betrayal of the Irish people who bailed out the bank at a cost of €35 billion between Anglo and Irish Nationwide”.

The then Central Bank governor Patrick Honohan told Department of Finance officials in 2015 there was a “moral case” for them to find a way to prevent these creditors recovering anything.

After the junior bondholders are paid off, any surplus cash would initially be used to pay interest owed to senior secured creditors, led by the State, then subordinated note holders. The Government then stands next in line on foot of its crisis-time bailout of the two lenders.

While the liquidators held €1.6 billion of cash as of last February, the ultimate scale of recovery on IBRC’s wind-up is still not known.

A court case involving the family of businessman Seán Quinn early next year will be a key determinant. The Quinns claim, in a case filed in 2011, that Anglo illegally lent them more than €2 billion to shore up their investment in the bank in 2008 and that they do not hold not liability for the amount.

Separately, Mr Donohoe recently appointed PwC Ireland partner David Tynan to assess if Anglo had any equity value on its January 2009 nationalisation. He is expected to conclude that it did not, meaning that ordinary equity investors and preference shareholders at the time are not due any compensation.

If Mr Tynan decides, however, that compensation is due, it would be paid out by the exchequer, which would then seek to recover the money from the liquidators of IBRC, according to sources.