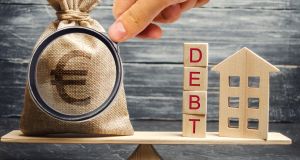 Global debt markets may come to a sudden stop amid a prolonged recession due to the Covid-19 crisis, the IMF has warned.

Global debt markets may come to a sudden stop, echoing the 2008 credit crunch, if companies become more distressed amid a prolonged recession due to the Covid-19 crisis, the International Monetary Fund (IMF) has warned.

The greatest risks are in the markets for junk bonds, buyout loans and private debt, which have expanded rapidly since the global financial crisis to a total of $9 trillion (€8.2 trillion) with the help of a general weakening of lending standards and borrowers’ creditworthiness, said Tobias Adrian, head of the IMF’s monetary and capital markets department, at the launch of the fund’s latest global financial stability report.

The report came on the day the IMF predicted the global economy will contract 3 per cent in 2020 – a swing from 3 per cent growth forecast three months ago.

While global stock markets and other risky assets have rallied in recent weeks from a sudden slump in March, helped as central banks slashed rates and announced over $6 trillion of stimulus efforts, analysts are unlikely to have fully reflected the extent of expected economic deterioration in their earnings forecasts for companies, according to the IMF.

“Strains in some markets have abated somewhat, and risk asset prices have recovered a portion of their earlier declines,” said Mr Adrian. “Sentiment continues to be fragile, however. Global financial conditions remain much tighter compared to the beginning of the year.”

The IMF report said that a further tightening of financial conditions may expose more “cracks” in the international financial system.

“Banks have more capital and liquidity than in the past, and they have been subject to stress tests and greater supervisory scrutiny, putting them in a better position than at the onset of the global financial crisis,” it said.

“The resilience of banks, however, may be tested in some countries in the face of a sharp slowdown in economic activity that may turn out to be more severe and lengthy than currently anticipated – a development that may lead to larger-than-anticipated losses.”

The report said that, although central banks will remain crucial in safeguarding the stability of global financial markets and keeping credit flowing through the economy, governments will also have to play their part.

“But this crisis is not simply about liquidity. It is primarily about solvency – at a time when large segments of the global economy have come to a complete stop. As a result, fiscal policy has a vital role to play,” said Mr Adrian.

1 Banks to keep charging interest on loans subject to Covid-19 payment break
2 ‘It’s a matter of fairness’: squeezing more tax from multinationals
3 ‘It’s been quite easy’: Insights from the heart of the remote working revolution
4 Why gift a son now if it eats into his tax-free inheritance threshold?
5 Banks in a bind; SuperValu boss departs; and €46m dividend at Copper’s
6 FC Barcelona to pursue Nike for compensation over defective shirts
7 What is Covid Tracker Ireland?
8 Osmo is a home-school hero – an app that educates and distracts
9 Gilead to add 140 jobs in Ireland as it plans new Dublin base
10 Denmark’s answer to Ikea signs deal for first Dublin outlet
Real news has value SUBSCRIBE

‘It’s been quite easy’: Insights from the heart of the remote working revolution 05:37
Osmo is a home-school hero – an app that educates and distracts 05:06
Forme Life Studio: Mirror, mirror on the wall, who’s the fittest of them all? 05:05
Sphero Mini Soccer: Play table football, bust through asteroids, create code 05:04
Legal tech start-up aims to make DIY divorces easier and cheaper 05:00