Portfolio of eight Bank of Ireland branches for sale for €10m

Layden Group is selling the branches, some of which failed to sell earlier this year 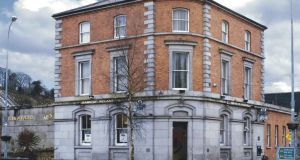 The portfolio includes a property in Enniscorthy, Co Wexford, which is for sale for €1.4 million

The Layden property group, which bought a portfolio of Bank of Ireland branches near the onset of the financial crash, is selling eight branch offices for a guide price of more than €10 million.

The company, which owns 15 branches, is selling the eight properties in a variety of locations. Two are in Dublin and the remainder scattered throughout the State.

The branches, being advertised on online bidding platform BidX1, are available in one or more lots and all properties are leased to the bank until 2032. Layden had previously sought to sell some of the branches earlier this year.

The most expensive property in the portfolio is a 672sq m building in Loughrea, Co Galway, which has a guide price of €1.89 million. An annual rent roll of €169,479 means the investment has an 8.97 per cent gross yield.

The next-highest price of €1.75 million relates to the Ballyfermot branch in Dublin 10, where the rent of €145,000 per year provides an 8.28 per cent yield. The same branch was advertised earlier this year at more than €2.14 million, while the Loughrea branch was for sale in February for more than €2 million.

The leases for the branches provide for upward-only rent reviews every fifth year and, since the previous break option in 2022 was purchased, the tenancy extends to 2032.

Developer Joe Layden paid €94 million for a Bank of Ireland portfolio, which included 29 retail branches as well as its call centre in Kilkenny.

The Layden Group is headed by Joe Layden. Its directors are Layden’s daughters Gwen, Siobhán and Anita and his son Jack. The company has invested more than €22 million since the crash on investment properties in the Dublin area, including in Grafton Street, Clonskeagh and Ballymount.