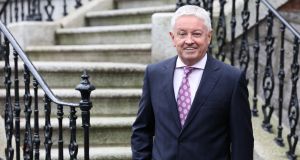 Billy Kane of Finance Ireland: the prospect of an initial public offering (IPO) of the business is still some time off, he says. Photograph: Bryan James Brophy

Finance Ireland, the State’s largest non-bank retail lender, plans to raise equity late next year in a fresh fundraising round as the business continues to grow, though the prospect of a long-awaited stock market flotation remains two years away, according to its founder and chief executive.

Speaking in an interview with The Irish Times, Billy Kane said that Finance Ireland, which has raised €85 million selling a combined 62 per cent stake in the business to US investment house Pimco and the Ireland Strategic Investment Fund (ISIF) since 2015, had no immediate need for fresh equity.

“But looking at our growth path, we’ll certainly be in the market again towards the back end of 2019,” he said.

The latest investment from Pimco and ISIF earlier this year valued Finance Ireland at about €140 million, including the new money. The company, which saw its loan book grow by 58 per cent last year to €668 million competing in motor finance as well as small- and medium-sized enterprise (SME), agri-finance and commercial lending, is set to see its portfolio breach €1 billion by the end of 2018.

The company confirmed last month that it was entering the mortgage market in 2019, having agreed to buy Pepper Money’s €200 million home loans portfolio and mortgages platform, with UK asset manager M&G Investments providing the funding.

The prospect of an initial public offering (IPO) of the business is still some time off, according to Mr Kane. Finance Ireland had been listed on the junior London and Dublin markets before the financial crash.

“We’d need to be capable of demonstrating a market value of €250 million to €300 million. We’re about two years away,” the chief executive said.

It has long been speculated in the industry that Finance Ireland could merge with smaller peer First Citizen, led by Chris Hanlon, who previously worked with Mr Kane at Irish Permanent. Both compete in car finance, as well as commercial property and funding of equipment and machinery for small businesses.

However, Mr Kane poured cold water on the notion. “If you put Chris’s business and our business together, two plus two doesn’t equal five. It only equals three. While there would be huge cost synergies, the way motor dealers work, they’ll always want to have a number of finance suppliers. If we merged, dealers would not give us the same amount of business that we each get out of them.”