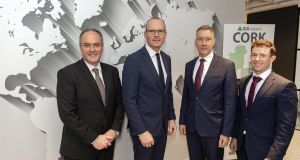 An Australian travel insurer plans to quadruple its staff numbers in Cork where it launched its European headquarters on Tuesday.

Having already taken on more than 20 staff, the company plans to increase staff numbers to more than 80 over the next 18 months, it said.

World Nomads is part of the Nib group, an Australian health and travel insurance company, which has a market value of around 2.5 billion Australian dollars (€1.59 billion) and more than 1,500 employees.

The company’s Irish arm is regulated by the Central Bank of Ireland and has European passporting rights.

“The MGA [managing general agency] will see our business not only distribute and sell travel insurance in Europe, but also provide all claims and insurance services to our travellers,” said World Nomad’s general manager for Europe, Bernard O’Sullivan.

“We are currently migrating our European travel insurance arrangements from the UK and continental Europe to our Cork office. We estimate this will involve the transfer of more than 100,000 policies,” he said.

Tánaiste and Minister for Foreign Affairs Simon Coveney said the jobs announcement was “another great day for the Cork economy” and noted that it demonstrated the county’s attractiveness for companies planning on operating in Europe.

“This is very important for the Irish economy, especially within the context of Brexit,” he said.

That message was echoed by IDA Ireland chief executive Martin Shanahan who said that World Nomad’s quick establishment shows the market the company’s can move operations with “minimum disruption post-Brexit”.

“Ireland has the right mix of regulation, skills, experience and office space to make us an obvious choice for financial services to locate and further demonstrates our importance as a gateway to the European Single Market,” Mr Shanahan said.